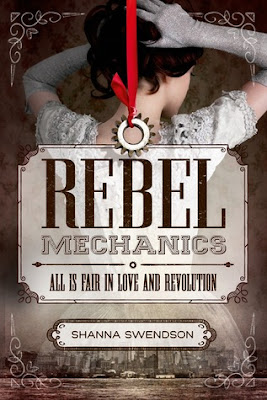 A sixteen-year-old governess becomes a spy in this alternative U.S. history where the British control with magic and the colonists rebel by inventing.It’s 1888, and sixteen-year-old Verity Newton lands a job in New York as a governess to a wealthy leading family—but she quickly learns that the family has big secrets. Magisters have always ruled the colonies, but now an underground society of mechanics and engineers are developing non-magical sources of power via steam engines that they hope will help them gain freedom from British rule. The family Verity works for is magister—but it seems like the children's young guardian uncle is sympathetic to the rebel cause. As Verity falls for a charming rebel inventor and agrees to become a spy, she also becomes more and more enmeshed in the magister family’s life. She soon realizes she’s uniquely positioned to advance the cause—but to do so, she’ll have to reveal her own dangerous secret.

Rebel Mechanics is an Alternate History/Steampunk driven novel that takes place in the 1888 American Colonies. Yes, you did read that right. In this universe, the Americans lost the Revolutionary War, the British still rule, and those with Magic, magisters, are responsible for keeping the colonies under their thumbs and magic out of the hands of normal people. Rebel Mechanics centers around Verity Newton who has the equivalent of a college education.

Verity journey's to New York City in an attempt to find suitable employment as a governess. Verity's journey begins by witnessing a robbery of a magisters courier by masked bandits, then riding on a steam driven Bus that can outrun magical transportation. After gaining employment with Lord Henry Lyndon, Verity soon learns that not everything is it seems in NYC. There is an unrest brewing and it's led by a group known as Rebel Mechanics. They are tired of the magisters control over the country, and wants machines to lead the charge in overthrowing the magisters.

Verity finds herself leaning towards the rebel cause even though she, herself, has the ability to use magic. She becomes a spy within the Lyndon household and starts writing guest columns for a sympathetic newspaper to the Rebel cause. While Verity is being lured into the rebellion by her new friends, her new employer Henry, has a few secrets of his own. Henry is the depicted as the older brother figure to his nieces and nephew. Next to Verity, Henry is my favorite character. He's got a whole lot more going on under his disguise than as the mild mannered Entomologist. While Verity is finding love with a rebel, she isn't aware that Henry and his friends have the same goals in mind as the Rebels.

Rebel Mechanics is a fun story with a blend of romance, steampunk, history, and characters that you can definitely love and hate. Thankfully, Rebel Mechanics is not a standalone even though the story wraps itself up easy enough. There will be a sequel with more Verity and Henry and their fight against the Magisters. There are enough questions about Verity and her magic alone to warrant another book.

**I received this book for free from Farrar, Straus and Giroux (BYR) in exchange for an honest review. This does not affect my opinion of the book or the content of my review.**