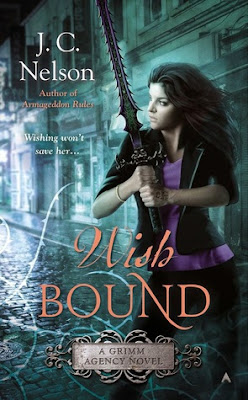 As a partner at Grimm’s magical Agency, Marissa Locks is used to working odd jobs. But when an evil queen reappears in Kingdom, life becomes too strange to handle…Even when she’s not starting it, trouble follows Marissa everywhere. First there was the incident with the homicidal Fairy Godmother. Then there was the time she accidentally started Armageddon. But the problems that always seem to arise on Marissa’s birthday take the cake.This year, her annual bad-luck presents include an army of invading goblins, the resurrection of two vengeful enemies from hell, and the return of the Black Queen, the evil sorceress whose reign of terror still haunts Kingdom and who happens to have claimed Marissa as her servant.As Marissa’s friends try to save her from the Black Queen’s clutches, Marissa fights to end a bitter war that started before her birth. But her quest for peace is about to bring up some inconvenient truths about her own past—ones that might cost her the happily ever after she’s always dreamed of…

Wish Bound, Grimm Agency # 3, is the apparent final story arc for protagonist Marissa Locks. Marissa is a character who you can't but help feel a bit of concern for. She was sold by her own mother to Fairy Godfather Grimm on her 16th birthday, she then went to work for him on her 18th birthday, and has been there ever since. For the last 10 years, she's done pretty much whatever he tells her to do. This book actually jumps ahead several years from the end of Armageddon Rules. Marissa is now a partner as well as an Agent for the Grimm Agency. The story takes place in a realm called Kingdom, where there are Kings and Queens, uptight and selfish Princes and Princesses, Goblins who deliver mail and idolize Marissa, Trolls who protect buildings, Witches and Werewolves just to name a few.

Marissa has found love in Liam Stone, a man with the ability to shape shift into a rather large Dragon. Marissa's best friend is Arianna Thompson, a princess and a witch who has been training with Grimm to keep her from going over to the dark side. I dare say that Ari really stands out in this novel. She's daring, she's a bit reckless, she stands up for her friends, she takes charge of situations, and isn't afraid to get her hands dirty if the situation warrants it. There is a bit of a shock involving Ari and her time spent in another realm. I dare say that it wasn't the only surprise that Nelson has in store for readers.

I do feel that you should start from the beginning with Free Agent, and work your way forward. Otherwise, you will miss a whole lot of back story including why Arianna Thompson, and Liam Stone matter to readers of this series. As Wish Bound starts, Marissa is about to celebrate her 28th birthday. If you've followed this series from the beginning, you know that Marissa avoids all parties and celebrations for fear that something bad will happen. With Marissa's track record from her first day at the Agency, you can count on something horrible happening and people getting hurt badly.

But, that is just the icing on the cake. While Marissa and Ari are off to another realm, the Black Queen makes her appearance felt in the Kingdom. Again, by not reading the previous novels, you don't know that Marissa has become the Black Queen's handmaiden, or that she wears her mark, or that she's stood in front of Queens and lived to tell the story another day. On top of the Black Queen's arrival a century earlier than predicted, and the apocalypse she wants to reign down on Kingdom, Nickolas Scratch, The Adversary, demands that Marissa find 3 souls that were taken from him, or he will make more problems for the Kingdom, and Marissa. Naturally, these lost souls have a major beef with Marissa.

Please note; Marissa is also one of the Harbingers of the Apocalypse. In this case, she's famine. I only mention this fact due to the other 3 Harbingers do make brief appearances. Death, one of my favorites of this entire story, does get his fair share of story time. Marissa has tried to remain rather humane towards her job and the fact that Grimm isn't the most forthright person when it comes to revealing what he knows. She has killed in the past, but really would prefer not to get her hands bloody, if at all possible. I wasn't at all happy with this aspect of the story. I felt as though Marissa should have stood up earlier in the story and put together a coalition of the willing. It isn't until the last third of this story that Marissa brings in the Wolves, vampires, goblins, and shocking guest appearance by a character I honestly thought was dead to take on The Black Queen's minions.

Lastly, and I said so in my updates, I thought the whole thing with Marissa losing her purse every five minutes was just plain ridiculous! Most heroines I've read about, including Gin Blanco, and Kate Daniels, either bring a bag filled with weapons, or they are stash in their vehicles. Too much time was spent on whether or not Marissa had her purse with her that carries her id and gun. Not carrying her gun around at all times put her in a rather difficult situation when the badness comes for her. After doing a bit of Twitter research, I had totally forgotten about Kitty Katt who also carries a purse. But, Kitty carries enough supplies to start a world war, and she wears it over her SHOULDERS!

There does appears to be a fourth novel in the Grim Agency series called The Reburialists. But, it has nothing to do with Marissa, Arianna, Liam, or Wyatt. It apparently will be an entirely new cast of characters. We shall see when January comes around if I continue to read that story or not.

I received this book for free from (Publisher) via (NetGalley) in exchange for an honest review. This does not affect my opinion of the book or the content of my review.