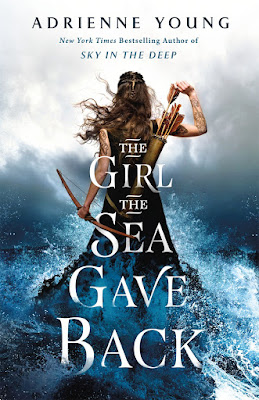 The new gut-wrenching epic from the New York Times bestselling author of Sky in the Deep.

For as long as she can remember, Tova has lived among the Svell, the people who found her washed ashore as a child and use her for her gift as a Truthtongue. Her own home and clan are long-faded memories, but the sacred symbols and staves inked over every inch of her skin mark her as one who can cast the rune stones and see into the future. She has found a fragile place among those who fear her, but when two clans to the east bury their age-old blood feud and join together as one, her world is dangerously close to collapse.

For the first time in generations, the leaders of the Svell are divided. Should they maintain peace or go to war with the allied clans to protect their newfound power? And when their chieftain looks to Tova to cast the stones, she sets into motion a series of events that will not only change the landscape of the mainland forever but will give her something she believed she could never have again—a home.

Adrienne Young's The Girl the Sea Gave Back is a companion novel to the authors Sky in the Deep. Once again, the author dives deep into Norse mythology to tell her story. Apparently, this story takes place 10 years after Sky in the Deep. The story follows two main characters from rival clans: Tova is a tattoo-covered Truthtongue who is feared by the Svell clan for her ability to cast runes and see the web of fate. Halvard, the kid from the Rikki clan from the previous book, is now all grown up and has been made heir to the clan. Something he believes he is not worthy of.

Tova was blessed/or cursed at birth to foresee the future using runes. Her tribe thought her dead and cast her out to the sea to their Gods when she was six. Curious, or destiny, she is found by a man named Jorrund from the Svell clan who raises her among his clan. The Svell perceive Truth Tongues to be bad omens. The Svell reluctantly allow her to remain while simultaneously trying to kill her and seek her guidance in a war with Halvard's Nadhir clan. When reading the runes, Tova accidentally sets in motion a series of events that will lead to bloodshed. Torn between guilt and loneliness, she is forced to take part in a blood feud with another tribe.

It is fair to say that Halvard was almost an after thought in this book. He is witness to a devastating loss and betrayal when there should have been peace. He spends a whole lot of time running from the Svell who want to kill him which ends up him meeting Tova who believes that Halvard must be saved so much that she joins his clan. Harvard and Tova have very little scenes together, although they think about each other a lot. His side of the story is more about him coming to terms with becoming the new leader of their clan. He feels unsure and incompetent but it is nice to see that everyone else from his clan see his potential.

The battle scenes in this book are brutal and bloody and the saving grace for the entire story. Some may argue that the romance is lacking in this book, and they might be right. Though, I might add that this did not bother me. The thing I didn’t enjoy: The time jumping threw me off it was so jarring because it went back 7 years, then 10 years, then 12 years. In a major WHOA moment, Nadhir clan combines the 2 clans we met in the 1st book – Riki and Aska together as one. On that point, there is a Eelyn, Fiske, and Iri sighting in this book. It is fair to say the ending leaves LOTS of room for more stories in this world.