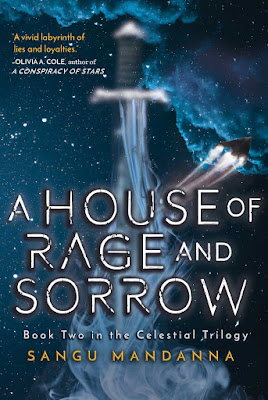 One kingdom. One crown. One family.

“Maybe it’s time the great House of Rey came to an end. After all, what are we now? Just a house of rage and sorrow.”

Esmae once wanted nothing more than to help her golden brother win the crown of Kali but that dream died with her best friend. Alexi broke her heart, and she vowed to destroy him for it. And with her sentient warship Titania beside her, how can she possibly fail?

As gods, beasts, and kingdoms choose sides, Alexi seeks out a weapon more devastating than even Titania. Past lives threaten the present. Old enemies claim their due. And Esmae cannot outrun the ghosts and the questions that haunt her. What really happened to her father? What was the third boon her mother asked of Amba? For in the shadows, lurking in wait, are secrets that will swallow her whole.

The House of Rey is at war. And the entire galaxy will bleed before the end.

A House of Rage and Sorrow is the second installment in Sangu Mandanna's Celestial Trilogy. The story picks up immediately from where A Spark of White Fire left off. Drawing on the Mahabharata and Indian mythology, Mandanna's trilogy takes the tropes of fate, love, and bargaining with the gods and shoots them to the stars. Fans of mythology and retellings will eat this up. You can feel the intensity of what is happening between Esmae and her family, especially her brother Alexi and her mother Kyra Rey.

It has been (3) months since Esmae's best friend was killed in a duel with Alexi. It has been (3) months of rage and grief. The prophecy is finally coming true and as much as she did not want to accept it in the first book, she is coming to term with it now. Esmae is on a path of vengeance and honestly, she doesn't care who gets hurt in the crossfire. Esmae has been betrayed by almost everyone she trusted. Her brother who fears an equal. A mother who fears a curse. A King who wanted Alexi to win Titania, but which ended up going to Esmae after she won a competition for it.

Titania the sentient starship that was created by two Gods and a King. We also get to see things from Titania’s perspective in this book. We see how she loves and protects Esmae, and despite just being a mechanical warship, she is a full-fledged character whose presence in the book makes it feel wholesome. This book is just as rife with tension as its predecessor and fills you with the same edginess as the first one.

Mandanna could have held back in this sequel and waited until the final installment to unload. I am glad she didn't. This book is filled with many emotionally charged scenes. The ending of this book was very explosive. I can't wait to see how the author deals with everything and wraps it in the next book. This story was easily one of the fastest reads that I have finished this year and yes, I am eager for the finale.