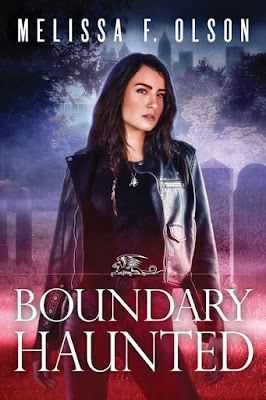 
Months after her battles in Wyoming, Allison “Lex” Luther is still struggling with the aftereffects of the psychic attack she suffered—and with the new developments in her own magic.

Then Lex’s boss, the cardinal vampire of Colorado, passes along a strange request from her counterpart in Atlanta. Hundreds of Civil War spirits have abruptly vanished in Beau Calhoun’s territory, and he wants Lex to figure out why. In exchange, Beau can help her understand boundary magic, which runs in his family line as well.

Despite her trepidation, Lex journeys to the Deep South, where she discovers that ghosts are everywhere…and that her host’s intentions are more complicated than he promised. It seems his teenage descendant is being hunted, and both Beau and Lex fear the young woman’s boundary blood may have made her a target.

With Atlanta’s history looming over her every move, Lex will have to face Beau’s ghosts—and her own—to prevent a boundary magic attack she never dreamed possible.

Boundary Haunted, by author Melissa F. Olson, is the Fifth installment in the authors Boundary Magic series. Protagonist Allison "Lex" Luther is an army veteran and boundary witch who 3 months before, was dragged into bad situation where she suffered damaging psychic attacks that still haunt her. She learned that once you raise the dead, they'll continue to call you where ever you are. Lex is asked by her boss, Maven, the Cardinal Vampire of Colorado, to take a new assignment which will take her to Atlanta, Georgia.

Maven is trying to do the impossible by creating a council consisting of vampire, witches, and shifters. She needs a parliament. Lex is supposed to be Maven's troubleshooter and fixer so it falls on her to convince Abner Beaumont "Beau" Calhoun to join her. But, Beau's ghosts have gone missing, and since Lex is a boundary witch, Beau thinks that she can help find them. Beau comes from a family of boundary witches and therefore can see ghosts. He may be able to help Lex figure her shit out before it destroys her. She has to also protect Odessa, his grand-niece from being harmed.

Lex is reluctant at first, until her twin-sister Sam, tells Lex in her dream that she is needed. If you've read this series, you know what happened to Sam. Sam has found a way to communicate with Lex, but often times is so vague, that it's frustrating for Lex to unravel what she's trying to say. Lex goes to the South, alone this time because Quinn is not allowed anywhere near his human daughter who lives in the area. That's another story for another time.

Georgia, as you know, is a place where it's not surprising to see ghosts from the Civil War era. After all, remember what happened to Atlanta? As someone who is very familiar with the area, the setting, culture, and old Civil War history was done perfectly. Props to the author for her research. Beau is a curious sort of character. He's a vampire who not only was turned during the War of Northern Aggression (as those in the South proclaim) but he also turned 3 of his friends. These friends are now called the Four Horsemen of the Apocalypse.

Beau tells Lex that the dead were laid to rest where they died. He calls them the Unsettled since the spirits haven't wandered from where they fell.  What's even more twisted is that Beau doesn't want the "Unsettled" gone, he wants them back and for Lex to find the person responsible. With Atlanta’s history looming over her every move, and ghosts every where she goes, Lex will have to face Beau’s ghosts—and her own—to prevent a boundary magic attack she never dreamed possible. Thankfully, Lex does get some assistance from her friends Simon, Tobias and Lily who has a shit load of responsibility on her plate thanks to her mother being murdered in the previous installment.

This book kept my interest and had enough twists and turns to keep me interested right up until the very end. If there was anything negative, it's the secret still hanging over the series as to whom helped Morgan in the previous story. Until that is settled, I am going to be a very unhappy camper.