#Review - Confessions of a Dangerous Fae by Jenna Wolfhart #Fantasy 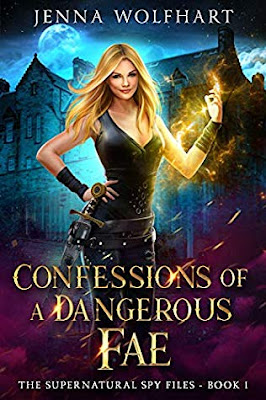 I'm a dangerous fae. I'll stab you with one hand while I apply mascara with the other. Every member of the royal guard has a unique power and mine is skill with the blade.

So, when my Queen hears of a new plot against the crown, I'm her top choice for a spy. A little adventure sounds like fun to me, even though I have to play nice to get the information we need. Problem is...our biggest suspect is Lugh: a cocky, sexy, powerful King I'd rather stab than seduce.

But as I grow closer to finding the truth deep within the Edinburgh streets, a strange dangerous magic draws me to Lugh. When his skin touches mine, I feel alive. And it makes one thing achingly clear. Lugh might be plotting to destroy my Court. But he might also be my mate.

The one an old prophecy claims I'm destined to kill.

Jenna Wolfhart's Confessions of a Dangerous Fae is the first installment in the authors The Supernatural Spy Files. This story's protagonist is Moira Talmhach who appeared in the authors The Paranormal PI files. Moira is sent by Clark Cavanaugh aka Morigan, Queen of Fae, to search for those who want to overthrow her reign. Her journey ends up in Edinburgh, Scotland where she discovers King Lugh who may or may not be who he claims to be. Earlier, Moira encountered Lugh looking for a powerful Cauldron.

Lugh is the King of the Court of Wraiths. The rest of Faerie doesn't know they exist, but Moira discovers that things aren't as Lugh believes them to be. Someone on the inside is working to sabotage the court. This is a court of runaways, fae fleeing from abuse, and criminals with useful gifts. Moira's only real ally seems to be Saorise who is part Druid and can see the future. Before she is allowed to join the court, she is force to sign a non-disclosure agreement, and kill as many slagh, think vampires, as she can without dying.

Moira isn't afraid of dying. In fact, her death has been close to becoming a reality more times than not. But, someone with a spear ends up helping Moira. The worst part is that the closer she grows to Lugh, the scarier it becomes. Prophecy claims that when she finds her fated mate, she is destined to kill him. As Moira works with Lugh to uncover a major conspiracy, she learns that the cauldron has the ability to bring someone back from the dead. Someone who Clark has already defeated after he tried to destroy her.

Moira is a decent character, but she makes some silly mistakes. She has a connection with Lugh's spear, but it takes her a very long time to understand what that connection means. Meanwhile, Lugh has already determined what she means to him. I think this is a good start to a new trilogy so I may end up continuing to see what happens next.