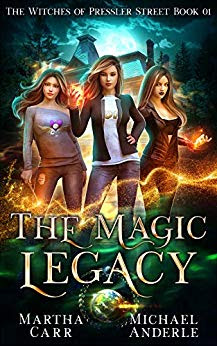 Witches are being murdered in Austin. But how do you put the monster back in the vault?

The three witches of Pressler Street are the city's only hope but they are running out of time.

A deadly creature has been locked away for millennia in plain sight. But big sister, Laura accidentally set the creature free and no one remembers how to put it back.

Find the witch-killer and stop its path of destruction on Austin. But what spell to use? Can the sisters figure it out?

Better hurry! He’s gunning for the Hadstrom sisters first. Time to come together and finally learn how to blend their unique powers into something new.

The Magic Legacy is the first installment in co-authors Martha Carr & Michael Anderle's Witches of Pressler Street series. What you should know. The story takes place in and around Austin, Texas. The main characters are (3) sisters: Laura (oldest), Nickie (middle) & Emily (youngest). Laura is an archaeologist and professor at University of Texas. Nickie is a renowned musical prodigy called Queen of Blues. Emily is graduating with a BA in Culinary Arts and one day hopes to run her own restaurant.

The sisters are witches who are told that they now must continue the family legacy of protecting witches and wizards from a bounty hunter known as Goraflex. Oh, and, before I forget. Earth is actually a "spaceship." The witches are from another planet called Arenya V. Earth is a sort of sanctuary from the Goraflex who was contained and imprisoned until Laura unwilling releases it from captivity and it goes on a hunt searching for witches and wizards. In this world, non-magical people are called peabrains.

But, these so called peabrains once awakened by the Goraflex, can sense and most likely use magic.  As for the different kinds of magics that each sisters wields, well that is the most interesting part of this story. Laura can spot a magical artifact from a mile away. She found a 500 year old wand in a creek, and can also make weapons. Nickie's gift, like her fathers, is in her music. She can make people feel the music.

Finally, Emily channels the strength of her magic from food. She puts her emotions, desires and passion into everything she makes. When I first started reading this book, I immediately thought Charmed. Then there are the rings that the sisters are given that apparently can do magic without the need of a wand. The rings apparently sense what the sisters need and does it for them, like making weapons out of iron, making them stronger, and with Nickie, gives her greater healing abilities. Can the sisters come together to save their fellow witches and save themselves? We shall see.

One the few curious nuisances in this book is the way the authors use inner conversations to tell the story. Each time the girls are speaking, it is as though they are talking to themselves while the audience is looking on and asking, is this person crazy? One of the other curiosities is Carl Hopkins who runs Hopkins Antiques. He is the one who Laura seems to gravitate towards whenever she needs help. However, it never says if this Carl is a witch, warlock, or just someone who knows a whole lot of information about almost everything. The main annoyance or me was this object called Gilroy who the sisters go to seek answers, only to be stars in a comedy script.