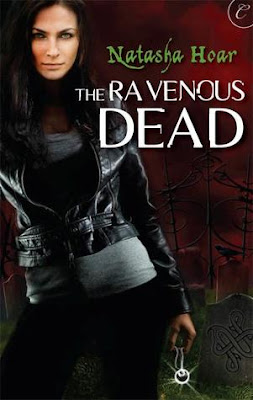 The Ravenous Dead, by Natasha Hoar, is the second novella in the Lost Souls series. Unfortunately, I have not read the first book (The Stubborn Dead) so I am a little behind the eight ball as it were. Rachel Miller is the protagonist and a member of the Order of Rescue Mediums. Her step-mother Clarissa Bellway seems to be one of the main people in charge. ORM is dedicated to the removal of stubborn or violent entities thus ensuring peace.

Rachel has taken in Kit Elkeles a rodach with wraith like abilities that seem to come out when he is angry. It seems to be her job to get him ready for any mission that may come up. As I missed out on the first story, I am not that familiar as to the why he ended up with Rachel in the first place. What I do know is that Rachel is somehow ignoring the Orders rule by not moving on after a successful mission and is keeping Kit hidden from the rest of the Order while teaching him to be a more complete rodach.

The Ravenous Dead’s main point is that a reaper is killing people and it’s up to Rachel to discover the reapers identity and to “rescue” the spirits that he has captured. A Reaper is individuals who decided to cheat death by becoming another entity entirely. That entity feeds off the souls of the living. By having a reaper show up in her town of Vancouver, she truly believes that this reaper may be the one that took the life of her mentor when she was 16 and a cocky little piece of work.

Another interesting and mysterious character is Luke Holt. Holt is known as an Upper Coven and is part vampire who Rachel and Kit rescue from the Reaper. Rachel has some unresolved issues to confront while they hunt for the reaper. If you are looking for any sort of romance in this novel, you might be a little disappointed. This novel leans heavily in the UF genre and leaves out all the naughty and hot sex scenes you have come to expect from PNR novels.

There are plenty of questions remaining--enough that a third novel should be released sometime in the near future. I will have to add the next book to my ever growing TBR pile just to ensure that I finally get a better understanding about Luke Holt and who he really works for.

In closing, The Ravenous Dead is an interesting yet predictable story. The characters all have issues and are damaged in one way or the other. We get a glimpse into Rachel’s past and how she hasn’t exactly been an ideal candidate to hunt down and eliminate Reapers. Obviously, it would behoove anyone that follows me in reading this series, to ensure they pick up the first novella and read it first before diving into this one. As with the first book, this book is only 24,000 words in length. You can pretty much finish it in one sitting if you had the patience to do so.