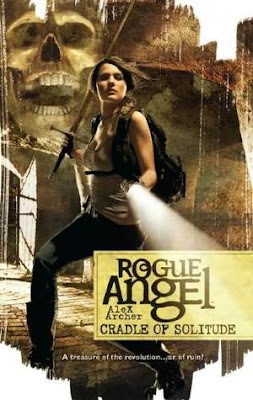 Cradle of Solitude finds our heroine Annya Creed on a lost treasure hunt. While in Paris on what seems to be yet another vacation, Annya is asked by the local police to consult in an urgent matter. The locals, it seems, have found the skeletal remains of a Confederate States of America (CSA) Captain by the name of William Parker. Parker somehow ended up dead in an underground catacomb under the streets of Paris and the police want to know how.

As the flashback indicates, Capt Parker was tasked by President Jefferson Davis in the year 1865 to find a hiding place for the Souths treasure of $700,000 so it didn't fall into the North's hands. The North by this time, had pretty much won the war, and was moving quickly to surround Richmond, Virginia. How Parker ended up in Paris is part of the mystery and conspiracy that leads Annya from France to Georgia, to Antietam and Gettysburg.

Annya is not alone in her determination to find the missing treasure. There is an infamous organization called Order of the Golden Phoenix lead by Blaine Michaels, that will do anything to keep the treasure a secret and ensure that nobody knows what really happened to Captain Parker. That means eliminating anyone who comes in contact with it's knowledge and secrets.

Annya once again finds herself deep in mystery, suspense and bloodshed as those she meets along the way, fall by the wayside due to Michaels brutality. Her one companion in this search just happens to be someone that Annya doesn't quite trust; Garin Braden. Garin always seems to find a way to beat Annya to the treasure, and this time is no different. Garin also reveals a secret that Annya has been wondering about for years; How in the hell does he know where I am all the time?

I can't believe I've read 30 plus books in this series and I'm STILL not caught up with the series! This book was more interesting and fun than previous installments. I have been a history buff since a very small age, and when it comes to the Civil War, I'm an addict pure and simple. It's not because I liked the war or the devastation it caused. It's because it shows that this country has come a very long way since it's founding and we still have problems to deal with.

I liked the revelation that the Order, or Friends of the South, was actually planning on betraying the South and making it one of their colonies in order to have easy access to cotton. If you allow your imagination to roam freely, you can really see that point of view happening. The only surprise is the fact that, to my knowledge, neither England nor France tried to invade the US during this brutal war in an effort to take back their colonies or territories.

I read this series because it's a cross between National Treasure, and Indiana Jones. The series is about a character is given the opportunity by fate to be a change for good, instead of evil. Annya still has issues and is still not sure of who to trust including Gavin Braden who once again appears in the story only to steal the spotlight away from Annya.

I read this series hoping that Annya will finally come to the realization that she can't go running around the world any longer hoping that she won't be recognized as the holder of Joan of Arc's legendary sword. How can she? She's front and center of Chasing History's Monsters, and she gets in trouble each and every time she tries to dig up the truth behind missing secrets.

Next in the series: Labyrinth (Rogue Angel #34)

Posted by Shelley Romano at 5:51 PM