Cover Reveal - Touch of the Demon by Diana Rowland 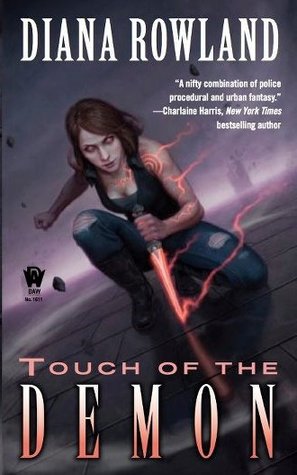 Kara Gillian is in Seriously Deep Trouble.
She's used to summoning supernatural creatures from the demon realm to our world, but now she's the one who's been summoned. Kara is the prisoner of the demonic Lord Msatl, but quickly discovers that she's far more than a mere hostage. He has his own plans to use Kara and keep her from Rhyzkahl-the demonic lord she is sworn to serve. However, waiting for rescue has never been Kara's style, and she has on intention of being a pawn in someone else's game.
Yet intrigue and treachery run rampant among all lords, and Kara is hard pressed to keep her wits about her. Her abilities as a homicide detective are put the the test as she seeks the truth about FBI Agent Ryan Kristoff, Rhyzkahl, and herself. But, the answers she finds only raise more questions. She soon discovers that she has her own history in the demon realm-one that goes back farther than she could have ever imagined. But that history may yet spell her doom as she’s faced with a peril beyond mortal comprehension.
She’s going to need all the strength and tenacity she’s developed as a cop and a summoner, or the hell she endures may well last forever.

*Sounds like Rowland has some serious intrigue up her sleeves. She's mentioned that there won't be a cliffhanger this time around, which is always a good thing! Yes, there will be plenty of Ryan as well, per Rowland. Can't wait for this release on December 31, 2012!!!
Posted by Shelley Romano at 10:50 AM