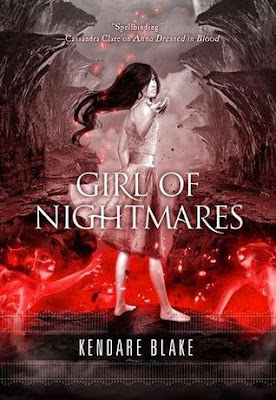 “Girl of Nightmares” picks up six months after the end of “Anna Dressed in Blood”. Cas and his mother have decided to stay in Thunder Bay to finish school. He still has his constant companions Thomas Sabin and Carmel Jones by his side as well as Morfan and Gideon for support.

The problem for Cas is that he is unable to move on and seems to find Anna in every face he's around. He then starts to wonder about his father’s athame (knife) and where the ghosts he kills really go now that the Obeahman is supposedly dead. This causes a rift between himself, Gideon and his mother which eventually leads to his trip to England to find the answers to his questions.

The major problem for Cas is a warning that there are secrets in this world that people kill to keep quiet. People, it seems, are watching Cas and they are the kind of people you don’t want to have watching you, or your back. These are the same people Cas’s own father used to work for and left because they had a falling out of sorts over the athame and how to use it. These are also people who are willing to replace Cas with someone more qualified and trained under their guidance.

While I liked the story well enough, this was not Anna Dressed in Blood. There was definitely more action, originality, suspense, and gore in the previous installment than in this book. I’m not saying I disliked the story. In fact, the story and the pacing and the way Cas eventually learns the truth that not everything is black and white, was done just right.

Cas was a real a downer in this book. He misses Anna like missing a body part and he starts seeing and hearing her everywhere he goes. He attempts to go out on a date, and falters...badly. He also nearly ends up getting his best friends hurt badly by continuing to take them on ghost hunts when he knows his mind is not in the game.

Cas meets up with his father's former group called the Order after Gideon tells him to stop with his nonsense and stay away. There he ends up reuniting with Anna at the near cost of his own life.

Then there are the side-kicks --Carmel and Thomas. I really wanted to throttle Carmel in this book for her actions and her flip flopping in what seemed like every 20 pages or so. I really felt sorry for Thomas in that he ends up being hurt by her shenanigans and should have moved on without her. Yet, Thomas and Carmel are made for each other and in the end, the duo ends up sticking by Cas’s side through thick and thin.

I'm UBER disappointed with Cas's mother. She’s supposedly a witch with some talent yet, she plays the third, and sometimes fourth string fiddle to Cass, Thomas, Carmel and even Morfan in this story. You wonder what exactly her purpose is in life besides being the one with the money to send Cas on his ghost hunting trips.

This one doesn't come close to being anywhere near as gory or suspenseful and that for me is the reason I'm not rating the book as high.
My actual thoughts upon finishing this book were…really? This is it? Are you effing kidding me?

So, while I'm rating it 3.5-4 stars, it's because I'm a wee bit disappointed in the overall concept of the story and not because Blake decided to change things up a little bit. I'm also highly disappointed that Anna didn't play more of a role in this book. After all, this series is called Anna, and not Cas.

Lastly, I’m disappointed in that this appears to be the last we shall see of Cas and Anna and crew and that is a shame. Please remember, these are my opinions, and may or may not reflect what others think about the story, the characters, or the actual plot of the story.

Posted by Shelley Romano at 9:20 PM

Email ThisBlogThis!Share to TwitterShare to FacebookShare to Pinterest
Labels: Horror