Early Review - Daughter of the Sword by Steve Bein 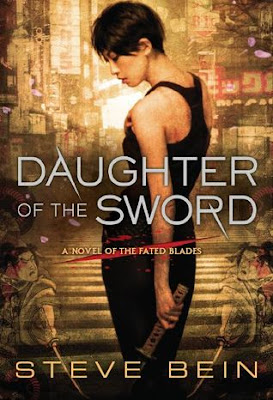 Daughter of the Sword is the story about Sergeant Detective Mariko Oshiro as the only female cop in the Tokyo Metropolitan Police Department. It’s a story about her daily struggles for respect among a department filled with men who believe that women have no place in the work place. It’s also a story steeped in history and destiny.

Mariko is an interesting character who I believe readers will respect and come to appreciate; especially women. She’s brave, courageous, and driven to get the most out of her job and her opportunities. She has other things to worry about as well, including the safety of her drug addled sister who continually ends up in harm’s way.

Daughter of the Sword is also the story about (3) legendary swords created by Master Inazuma that have played important roles over the course Japanese History and whether or not they are magical or cursed.
Although I found the back story about the swords interesting, I would have preferred to stay focused on Oshiro and Professor Yasuo Yamada who becomes her sensei and friend and seemed to know more about the swords than he was willing to tell Oshiro.

Steve Bein is a new author to me which always gives me pause. You never know what to expect from newer authors. Bein gives readers a really detailed novel that thankfully, has a glossary of terms at the back of the book. I believe that history buffs that will enjoy the correlation between swords and events that happen throughout the book.

I think there were some good things, and some not necessary things in this, the first book of the series. The world building itself was absolutely brilliant. I understood the need for flashbacks to various times throughout Japanese History in order to tell a more detailed story about the legendary swords. I liked that the 3 swords appeared to be magically created and created either mayhem or protected the owners from harm.

Like Stormdancer by Jay Kristoff, this book starts slow, and ends with a bang. Once again you have a male writer telling the story from a female character’s prospective and doing a moderately decent job of putting readers into the characters shoes. It shall be interesting to read the next book in the series to see where Bein takes Oshiro and her new blade.

Daughter of the Sword was sent to me by NAL/ROC trade in lieu of an honest assessment and opinion of the book. Expected publication: October 2nd 2012 by Roc Trade.