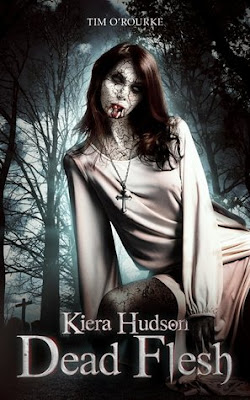 Dead Flesh begins a new chapter in the lives of Kiera Hudson, Sean Potter, Kayla Hunt and Isidor. It has been 6 weeks since Kiera woke up from the dead after refusing to make a decision that the Elders had laid at her feet. Kiera’s failure to make said decision has cursed Kiera to walk the earth as one of the Dead Flesh. If you haven’t read Vampire Hollows, I would absolutely recommend that you do so before jumping into this book.

Kiera learns that she has returned to a world that has been changed. Vampyrus like Potter, no longer exist in this world nor do half breeds like Kiera, Kayla and Isidor. Further investigation leads them to learn that the world has been PUSHED just a little off kilter. Werewolves (now called Skinwalkers) and humans hold an uneasy truce that was put in place after years of being at war with each other. In an effort to hold the peace, every 5 years werewolves are allowed to enter one village and take children over the age of 13, and under the age of 18. The children are held prisoners and then matched with a Skinwalker. The matching is straight out of science fiction and not your usual bite/infection/or born.

Dead Flesh is actually told in two separate POV’s; Kiera and Kayla's. I actually thought this was well done and I’m not a fan of alternating POV’s but I liked learning more about how Kayla is feeling since she was given a different mission than Kiera. I liked seeing her try to pick up and follow in Kiera's footsteps with her own investigation into what is happening at the Ravenwood School. You can literally feel the tension as it ratchets up and the story nears its climatic ending. We also meet a new character and an old character who stuns readers with his return and his own little revelation into what happened to the world since Kiera and crew were gone.

Tim has once again taken readers on a wild ride that is filled with suspense and off cut humor thanks to Potter and Isidor’s banter. It is a ride fraught with an unknown angle that isn’t revealed until the very end. You could actually say the ending was a major stunner that will definitely be played out over the course of this new Kiera Hudson series.

Overall, I'm pretty happy with this installment and would recommend it to those who have read Tim's other works.

Posted by Shelley Romano at 8:49 PM