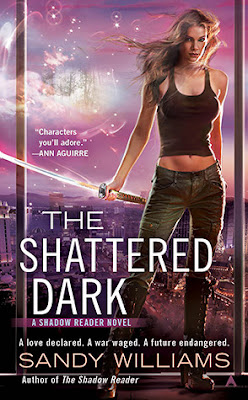 The Shattered Dark is the highly anticipated sequel to 2011's The Shadow Reader. The book is filled with action, suspense, betrayal by the most unexpected source, and decisions that are made without Kenzie's consent, as well as the the ole reliable three way love triangle that just won’t go away no matter how hard you wish it to.

McKenzie Lewis is a rare breed of human who has been gifted with the ability to see the Fae as well as track their shadows (movements) anywhere they go. She worked for the King of Fae for 10 years tracing the locations of wanted Fae and in return, she became something of a legend to the Fae and a target for the rebellion.

The Shattered Dark begins 2 weeks after the fall of the dreaded King of the Fae by the rebel Fae lead by Lena. Kenzie is ready to settle down and find a well-paying job where she can finally retire as a Shadow Reader (nalkin shom) and maybe spend some much needed quality time with Aren.

Aren, on the other hand, has been extremely busy chasing down a group of Fae known as the Remnants. The Remnants are Fae who remain loyal to the former King and are causing constant problems for Lena’s tenure as would be Queen of the Fae.

Once again, Kenzie is at the center of the attention when her best friend Paige goes missing, and is presumed to have been taken by the Remnants. But, for what purpose? William’s does a flashback to the time when Kenzie and Paige first met and you shouldn’t be surprised by how much the two have in common or how far Kenzie went to keep Paige out of the loop and away from the Fae. We also learn more about Aren’s past and his relationship with someone Kenzie really hates since he dragged her into Faery kicking and screaming when she was 16 years old.

Kenzie is still torn over her emotions towards Aren in that she doesn’t want to just rush into a committed relationship especially after knowing Aren for less than a month. She spent the previous 10 years being frustrated by Kyol’s lack of proof that he actually loved her and with Aren constantly away, her heart is being pulled apart at the seams.

In the end, Kenzie will be betrayed, have her heart broken into tiny pieces by the decisions of the men who love her, and finds that she really needs a break from all the Fae nonsense that has taken 10 years of her life away from her and made her a target for any Fae with an agenda.

Once again, I am hesitant to label Kenzie as a kick ass heroine. She continually loses her weapons, and gets knocked out, and beaten up at the drop of the hat. At this point, the story slowly loses points in my ratings because I really am tired of having her fall all over herself in order to impress Aren or Kyol with her ability to protect herself when in reality she can’t.

In conclusion, I will say that the ending of this book is a game changer for both the series and the main characters and we can only sit back and wait to see where Williams takes her series and her characters in the third installment of this series next year.