The RIft by Andrea Cremer 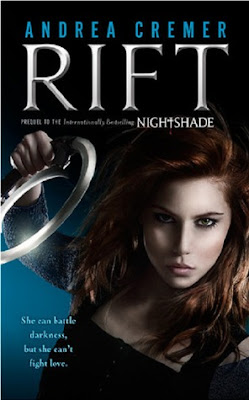 The setting for Rift is Fifteenth Century Scotland which is where the supposed Witch’s War started and also the creation of the Keepers, and the Searchers. This is where 16 year old Ember Morrow lives and knows that a reckoning is coming soon because of a debt her father is owed to the Conatus. If you are looking for a comparison, think of the Conatus as an off shoot of the Templars. They’re main charter is to confront the secrets of the arcane and defeat them before they can wreak havoc on society no matter the cost or time it takes.

Ember is more than enthusiastic about her opportunities to get away from her father's ridged rules and desires to marry her off to first person he can find to strengthen his land and position. If you are looking for a person to loathe in this book (besides the obvious villains), take a look no further than Ember’s own father. Ember is an interesting character in that she's impetuous and bullheaded as well as strong, determined and a courageous young lady. It seems she can easily handle various weaponry and takes to being a knight-in-training like a fish takes to water.

Naturally, there is the dreaded “feel” of a three way love triangle which I absolutely loathe and haven’t forgiven Cremer for her choices at the end of Bloodrose. Alistair Hart is a Knight of the Conatus, the third son of a noble, and has been in love with Ember for most of their lives which isn’t returned. Barrow Hess is another Knight of the Conatus who becomes more than just her mentor and trainer. In the end, I wasn’t at all surprised by Cremer’s decision as to who Ember feels comfortable with, or Alistair’s choice of direction in which he turns.

Rift is told in the third POV and flip flops between Ember and Eira a member of the so called Circle who was once part of the Guard. Eira is lured into the temptation of darkness by a cunning master of deceit who won’t take no for an answer. Cian is Eira’s sister and we can see that there is a difference of opinions in which way the Conatus should be taken.

Rift is the prequel to the entire Nightshade series. We’re supposed to find out how Bosque Mar, the Keepers and Searchers came about. I guess we’ll have to wait until the next book for further revelations since this book leaves readers hanging in the air waiting to see where she takes the story next and her characters next.

Overall, while the book was enjoyable, it was also pretty predictable in the choices characters made along the way. I liked the setting of Fifteenth century Scotland, but would have enjoyed it even more with a little bit more world building. This book skirts the whole idea between the Church and how it treats women and just happens to occur just before the whole Salem Witch trials hit not only America, but Europe as well.