Early Review - Magic for a Price by Devon Monk 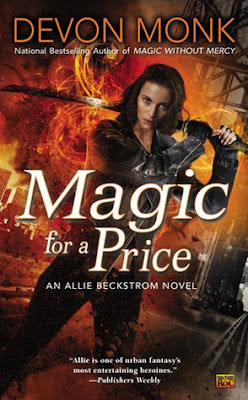 Magic for a Price picks up right where Magic without Mercy left off. Allie, Zayvion, Terric, Shamus, Maeve and others are on the run from the Authority. They have survived the great show down with Jingo Jingo and his supporters but not without heavy losses. Unfortunately, they are not out of the woods by any stretch of the imagination.

Magic around Portland, Oregon has been poisoned spawning the veiled, ghosts of dead magic users who in turn are infecting and kill the living. There is also the pending arrival of Leander and Isabel, two undead and super powerful magic users who are on the loose and in the body of the Overseer. Leander and Isabel’s mission seems to be the permanent removal of all Soul Complements like Shamus and Terric, Allie and Zayvion as well as the reuniting of dark and light magic to rule the world. They also have a special target in sight for Allison’s father Daniel who just happens to possess a part of her mind.

Allie has become something of the de facto leader of the rag tag remnants of the Authority as well as her hounds like Davy and Sunny and that aspect is put to the test when she has to lead the entire group of Portland magic users against the threat of a lifetime in Leander, Isabel, and those they control. She knows that magic is slowly killing her, yet with her father possessing her mind, she knows she has no choice but to stand up for herself and her friends. Allie has known that the use of magic takes a heavy toll on the body. So much so, that she has lost tons of memories over the years and has taken to writing things down in her notebook so that she can remember them.

Monk puts the emphasis on concluding her series by tying up loose ends in such a way that won’t leave readers disappointed or angry that they’re no longer going to be seeing Allie and Zavy around unless they are part of any spin-off series the author may have in store for us. Monk has to face the music when all is said and done that the story makes sense and the loose ends are not tied up in such a way that it will make readers eyes roll out of their heads in angst and disgust. I personally think she did a pretty decent job.

I was understandably reserved when reading this last book in the series. I wanted to know for myself what Daniel Beckstrom did to his only daughter to cause her so much pain while using magic. I wanted to know what Stoney, the gargoyle, was really made for and what his final part in this series was. I also wanted to know more about Cody Miller and why it seems he is destined to be the one who is able to stop things from going to straight to hell. Lastly, I also wanted a HEA for Allie and Zavy since they’ve been through a lot over the course of this series. I believe I got all my questions answered in a way that made me walk away from this series with a smile on my face and not wonder what if.

In conclusion, Magic for a Price is not the perfect book. The ending kind of drags on for a while after everything is said and done and the action comes to a blazing crescendo. However, because of the whole HEA aspect of a final book in a series, I will reserve my dislike for what I believe was hyperbole and just say, go, go out and rent or purchase this book if you have read this series. You won’t be wrong in doing so.

*ARC was accepted from the publisher in lieu of an honest review on my part. No monetary award was accepted, and none was expected.*