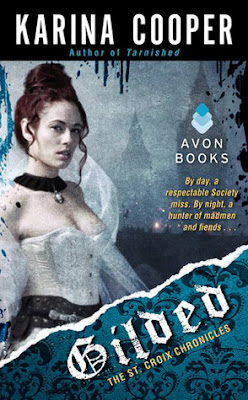 “Gilded” once again takes readers to Victorian England where life is different depending on your status in society and where you live. It’s a place where one woman leads a double life fraught with danger, suspense, and mystery. It is a world filled with steampunk contraptions, and mysterious organizations that live above and below London’s streets.

Gilded is the second novel in Karina Cooper’s The St. Croix Chronicles. It was added to my highly anticipated sequels after reading the ending to Tarnished. Tarnished left me with plenty of unanswered questions especially about the mysterious collector who seems to have Cherry in his sights and the mystery surrounding her own father’s activities.

Once again, Gilded is told in the first person POV by our heroine 20 year old Cherry St. Croix. St. Croix has been living a double life for the past 5 years. Even though she is clearly an outcast in London’s Society and everyone calls her the Madman’s Daughter, she still has obligations to appear at balls, dances, and other shindigs while looking for a potential husband whom she feels she doesn’t need nor want. As a reader, I found this aspect to be the most disheartening because of the way certain societal matrons treated Cherry.

Cherry is also the mysterious Miss Black a collector (seeker) of bounties for the Midnight Menagerie led by the enigmatic and extremely mysterious Micajah Hawke. She owes an obligation to Karakash Veil after Hawke saved Cherry’s life in Tarnished from her father’s treachery.

Cherry suffers from memory loss and night terrors due to her excessive use of Opium and Laudanum. It doesn’t, however, keep her from trying to figure out what her father was up to, or figuring out who is killing off professors at the University of London. This is probably the most interesting aspect of the story in that Cherry gets challenged into solving the mystery behind the murders by Lady Rutledge someone she truly respects. It’s especially hard when Cherry firmly believes in science and fact, and not magic.

On top of everything else, Cherry is six months away from inheriting her family’s fortune which would leave her free to do just about anything she wants to do. Cherry doesn’t want to be weighed down by anyone, let alone a potential husband. Then there's the unwavering advances of suitor Earl Cornelius Kerrigan who won't take no for an answer and goes against his mother's every wishes by chasing after Cherry.

Once again, a books ending has left me in bewilderment and in agony. Bewilderment because I was surprised by some of Cherry's decisions that I really was hoping she wouldn't make. Agony because one of those decisions really puts Cherry and her caretakers at risk of being left out in the streets and leads Cherry to falling back into her old destructive ways.

Although I was left bewildered by the way this story ended and the choices that Cherry makes along the way, I still found the story to be extremely interesting and well worth the time it took to finish the book. I am definitely looking forward to the third book in this series when it comes out.