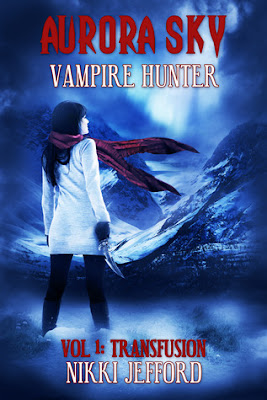 Nikki Jefford is an author who is pretty new to me but has been on my radar with her Young Adult series Spellbound. Since I am participating in the blog release party for this book (January 1), I thought I would go ahead and familiarize myself with her work so that I’m not shamelessly promoting something I don’t necessarily like or agree with.

The story Jefford’s creates in Aurora Sky: Vampire Hunter is not a new concept by any stretch of the matter. It’s pretty basic at its core and a fast read at that. It’s also unique in its approach to how vampires come into being. I won’t spoil the book for those who may want to read it in the near future. Suffice to say that these vampires are different from your Twilight vamps and are based on blood type and diseases instead.

As for our heroine, Aurora Sky is a pretty normal 18 year old who is looking forward to graduating from High School and getting the hell out of Alaska and away from her friends who have turned cold towards her for some unknown reason. When she dies in a car crash and is later revived by a government agency that wants to use her rare blood type to rid society of demons (Vampires)--she has absolutely no choice but to cooperate with them thanks to her own mother’s ineptitude.

Caught in a situation where she no longer gets to decide what’s in her best interest and needs a yearly antidote to prevent her from vamping out, Aurora finds that she needs to make the most of what she has become. She trains to become a vampire hunter using her now tainted blood with various deadly diseases in it, to bring about the end of any vampire who just happens to nibble on her neck. She even has her own mentor in Dante who goes on hunts with her and teaches her the ropes.

There is a bit of adult situational romance and sex involved in this book as well. You could say that the sex was gratuitous in nature since it becomes one of the goals Aurora has to complete after she is brought back from the dead. You will also find that Aurora ends up falling hard for a character by the name of Fane and in the end it is revealed that she has to make a hard choice when it comes to either staying in the relationship with him, or letting him go.

Overall, I enjoyed the fact that the read was pretty fast paced and laid out so that anyone can figure out what is happening. The ending leaves questions as to Aurora’s status as a vampire hunter and her future with Fane. As for Aurora’s overall characterization, I would say that I wasn’t totally happy with some of the choices she made or the fact that it turned, at times, into a teen angst festival with mean girls. I didn’t much care for the so called Agents and their agenda, and I sure as hell didn’t much care for Aurora’s mother or for that matter, her father.

Jefford’s has stated that the next book in the series called Metamorphosis, will be released sometime early in 2013. I will most likely read the book hoping that some of the more important questions are answered.