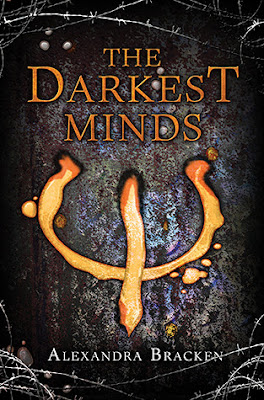 “The Darkest Minds tend to hide behind the most unlikely faces.”

As a reader/reviewer, I normally go into a YA Dystopian novel with an open mind and a clear conscious hoping that I will be blown away by the story and the characters. I try NOT to read other people’s reviews until after I am finished reading the book for fear that I will be swayed into thinking I should have liked the book better than I actually did.

YA Dystopia has exploded over the past several years and “The Darkest Minds” is the latest in my exploration of that world piece by piece. “The Darkest Minds” did exactly what I had hoped it would do; it totally blew my mind right out of the water. I totally enjoyed the back story and, of course, the world of 16 year old Ruby Daly who is caught in the middle of a vicious world where children are now the enemies of the state.

The key to success in any Dystopian Novel is the world building. With “The Darkest Minds” Alexandra Bracken has created a world where children are targeted by a virus known as IAAN that either leaves them genetically altered forever or ends their lives before they get a chance to fully grow. The children then show signs of altered brain activity, IE, they have the ability for mind control, telekinesis, etc. This makes them extremely dangerous in the eyes of a corrupt and overbearing government who then rushes to judgment by implementing concentration camps for the children in order to save the adults from being manipulated.

As with other Dystopian novels, the world of the “Darkest Minds” is set in a future not far from now that leaves the country reeling and on the brink of destruction. People have lost the ability to find and gather food, they’ve lost their homes, and their jobs, and with children considered dangerous and in concentration camps, they end up fearing those they are supposed to take care of and love. There is also the presence of a group known as The Children’s League which is supposed to help free kids from their imprisonment and fight back against the tyranny of President Gray’s administration. Yet, not everything is as it seems.

As for the characters themselves, Ruby is a really interesting character and fully developed into someone I can relate to and follow from the first page to the last. She felt genuine in that her emotions or lack thereof, are realistic and not jumbled or faked. The way the story is told, you can’t really tell what happened to Ruby that she ended up in the concentration camp for 6 long years. You are told about the IAAN virus and the fact that adults lost their bloody minds when they sent their kids off to be “Rehabilitated.” It isn’t until she has help escaping and meets someone with the same abilities as she has that the truth finally comes out.

The only negative for me was the sloppy attempt at installing a 3-way love triangle into the storyline between one pretty decent character, and another who had ulterior motives for getting close to Ruby. For me, it just didn’t float my boat. I am a fully licensed hater of all things love triangles in anything except for contemporary romance. I think it takes away from the storyline and the enjoyment of the novel itself. Of course, I also realize that I am in the minority with my feelings on that subject.

I am totally missing out on the secondary characters like Liam, Chubs, and Suzume who Ruby stumbles upon and joins in an effort to find a sanctuary away from the PSF’s (Psychic Special Forces), Skip Tracers, and other PSI’s who work for the government. While other people will swoon over Liam the so called love interest, I found myself actually rooting for Chubs. There is something about a kid that has had everything stacked against him that really makes me want to know more about him and cheer for him to find a happy ending.

Alas, my poor followers, if you hate cliffhangers, you are going to really hate the ending to this book. I almost cried in agony when the book finally ended and things just didn’t end the way I expected them to. ::sigh:: Leaves me in pain until the sequel to this book is released in December of 2013.