Review - 'Til The World Ends by Julie Kagawa, Ann Aguirre and Karen Duvall 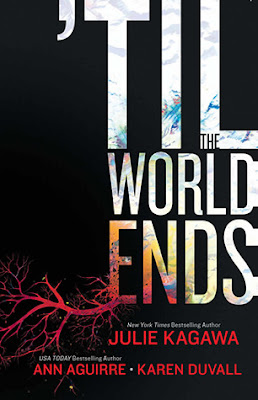 ’Til the World Ends is an anthology that contains (3) novellas set in a post-apocalyptic world. Julie Kagawa penned the story Dawn of Eden. Ann Aguirre offers Thistle & Thorne which is a standalone, and Karen Duvall offers up Sun Storm.

“Dawn of Eden” is considered the prequel to “The Immortal Rules” by Julie Kagawa. Instead of being a YA novel like THR, it’s told by adults. This prequel focuses on the lives of Kylie and Nathan Archer two 20 year olds who have somehow survived the Red Lung. Kylie, as a survivor of the Red Lung Disease, has tried to save as many humans affected by the Disease as she can while running a medical clinic and it’s a losing battle.When Nathan Archer arrives on the scene, things quickly change from bad to devastating and Kylie and Ben are forced to flee to Nathan’s hometown. There is a mysterious vampire known as K that makes an appearance and I was actually drawn to the mystery behind this person. Who is it? What was his crime against his people that has him on the run? I think we all know the identity of this vampire, but I shall not spoil it for anyone! I actually enjoyed the Immortal Rules very much and therefore I found this prequel/short story to be filled with promise and adventure as well. I loved Kylie who was trying to hold onto hope while trying to save as many people as she can from the Red Lung. As for Ben, he carries a whole bunch of baggage around with him. He carries secrets as to how the virus spread as well as a longing to go home and reconcile with his family before it’s too late. Since this is an adult themed novella, there are some sex scenes between Kylie and Ben which I’m surprised by since this is the supposed prequel to a YA series. (4/5 stars)

“Thistle & Thorne” by Ann Aguirre is the second novella in the anthology and a standalone with no attachments to any other series. This is a world where a catastrophic chemical spill turned the country into wasteland leaving fortresses for the Rich and slums for the poor. It is a world where people who live outside of the fortresses do whatever they can in order to survive day by day. The story focuses on Mari Thistle who comes from a family of thieves that goes back 300 years. In Mari’s case, she steals things in order to protect her brother and sister. After agreeing to work for the crime lord himself and failing at her mission, Mari finds herself hooking up with the dark and dangerous Thorne Goodman in an effort to stay alive and later helping Thorne take down the crime lord. I love the fact that although there isn’t any romance between the couple, there is a definite feel of electricity that flows between them. I guess you can call me a sucker for all things that have been written by Ann Aguirre. I loved the pacing of this book right from the start as well as the world building. I would love to see another story surrounding Mari and Thorne! This book has similar feelings to the Immortal Rules in that both female leads are forced into a hunting and gathering items in order to survive. Probably why I liked it so much! (4/5)

“Sun Storm” is the first novella that I’ve read by Karen Duvall since her Knight’s Curse series came out in early 2012. It’s the story about two individuals, Sarah Daggot and Ian Matthews, who have been changed by the Sun’s attack on the Earth. Called Kinetics because of their ability to predict when a storm will come, or the ability to control the weather, Sarah and Ian’s abilities may be the key to saving the planet from final destruction. Although I found aspects of this story appealing, the story was probably the weakest link in this anthology. I’m sorry to say that since Duvall has created a world where few people wander into the sun anymore for fear of turning up dead, or altered. The chemistry between Sarah and Ian was a given right from the onset. It usually is in a novella of this length. Sarah was definitely the stronger character in that she knew exactly what she needed to do in order to save people’s lives including her own father. Ian, on the other hand, is one of those characters who felt that the world owed him something so why should he care? Overall, this isn’t a bad novella by any stretch of the imagination, and I probably would have given it a higher mark it didn’t rush to the ending. (3/5)