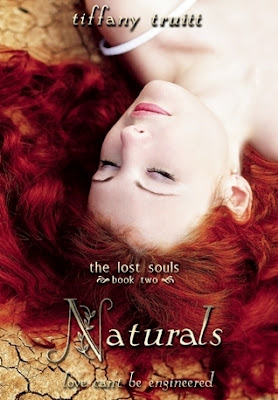 Tess is finally safe from the reach of the Council, now that she is living in the Middlelands with the rebel Isolationists. With James having returned to Templeton, she easily falls back into her friendship with Henry, though her newfound knowledge of Robert’s chosen one status still stings. Even surrounded by people, Tess has never felt more alone. So she’s thrilled when James returns to the settlement, demanding to see Tess — until she finds out that it’s because her sister, Louisa, has been recruited into Tess’s old position at Templeton, and that the dangerously sadistic chosen one George has taken an interest in her.

Whenever I get the chance to read a second book in a series, or trilogy, I often hesitate and pray that it's better than the original. Often times than naught, I'm left disappointed. For Naturals, the sequel to Chosen Ones, I got exactly what I wanted out of the book. I found the story more appealing on so many different levels and obviously, I will be eagerly awaiting to read the third installment.

Naturals picks up two days after the end of Chosen One's and finds Tess, McNair, Henry, Robert, and Eric heading out of a mission to find the Naturals encampment (Isolationalists). Tess becomes a stronger character overall this time out and really stands up for herself and her friends. She finds herself in a different situation where people don't trust her and she often has to prove herself in order to remain within the encampment including learning how to milk cows and taking a shower au natural.

She makes friends with a character named Lockwood and learns that she needs to work hard in order to fit in with the Isolationalists. Tess often finds herself wondering what happened to James after she left Templeton, and she finds that she is getting closer to Henry in many different ways until James shows up at ISO camp and ends up having to fight for his survival. Tess also has a conundrum in that she really feels awful about leaving her sister Louisa behind at at the mercy of those like George who has an agenda all his own which we later find out involves Tess and James.

As with all second novels, it seems, there is a pretty interesting cliffhanger which will leave readers wondering what the heck is going to happen next. Overall, I found Naturals to be appealing and enjoyable and will definitely read the third installment once it is released.