Review: A Kiss of Blood (Vamp City #2) by Pamela Palmer 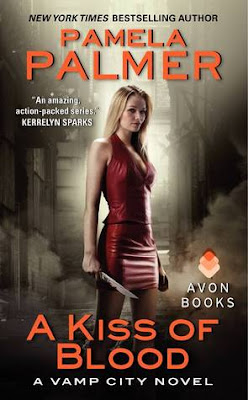 If you haven't already started reading the Vamp City series by Pamela Palmer, let me appeal to your curiosity and intrigue. Vamp City is set in an alternate reality Washington, D.C. filled with vampires, werewolves, sorcerers, and Fae. The city was created in 1870 by a very powerful wizard named Phineas Blackstone but is now experiencing a magical loss and the powers that be firmly believe that Quinn Lennox can, and will be their savior even if it kills her or them in the end.

There are two kinds of vampires in Vamp City: Rippers, and Emoras. Rippers feed on human blood, while Emora's feed on blood and emotions like pain, fear, and pleasure. Oh, and there's Lots and Lots of pleasure for those who expect smexy scenes from your novels. A Kiss of Blood is, in my humble opinion, much tamer in nature than the first book A Blood Seduction but not so much when it comes to smexy scenes. ABS was filled with abuse, rape, torture, and nearly turned me away from the series. This is why there are second books in a series to prop up what happened in the first, and even exceed expectations.

As I mentioned, Quinn Lennox is the stories protagonist, who, along with her half-brother Zack, stumbled accidentally into Vampire City in A Blood Seduction and nothing has been the same since for either character. Quinn has reluctantly come to terms with the fact that she's a sorceress with unknown abilities and may actually be Vamp City's savior even though she hates the place and would not mind seeing it die a slow and painful death. She actually grows as a character in A Kiss of Blood and becomes someone you can honestly follow and not want to throttle. Her opinions about the vampires also are swayed by the arrival of some very interesting new characters.

Although Quinn has made it her mission NOT to return to Vamp City, when Zack ends up sick with what is thought to be magic illness, she realizes that she doesn't have a whole lot of choices at her disposal in curing Zack other than returning and attempting to help save Vamp City from its imminent demise. Especially when Arturo Mazza, the centuries old Italian Vampire who used her, lied to her, abused her, betrayed her, and gave her to his psychotic master Cristoff Gonzaga to further torture and abuse, refuses to let her go and may have found himself irrevocably drawn to Quinn like a moth to a flame.

It's still true that Quinn is stubborn and doesn't exactly trust any of the vampires who have done nothing but turned her world upside down. But, in the end, she eventually learns how to trust Micah, Kassius, and maybe even Arturo. The vampires have, in essence, put their very lives in her hands, and it's up to Quinn to figure out her powers, save her brothers life, and save Vamp City before Cristoff can reign hell down upon all of them.

If you haven't already read A Blood Seduction and would like to read A Kiss of Blood first, I honestly don't see a problem with that idea. Palmer ties both series together really well with a summary of what happened previously, and why Quinn wants nothing to do with Arturo or any other vampire for that matter.

By reading A Kiss of Blood, I was actually hoping for more information on the whereabouts of Zack's best friend Lily Wang who disappeared before Quinn & Zack stumbled their way into Vamp City. Palmer does her best to incorporate Lily into this story which I appreciated, but then leaves yet more questions about her safety and survivability in Vamp City’s hostile environment that feasts on Humans, and enslaves them so that they never end up leaving the city and become Slavas (Immortal Humans).

In my opinion, A Kiss of Blood is a good story but it could have been better. I didn't rate it higher because the story line really doesn't move forward all that much from A Blood Seduction. Quinn is still being hunted by Cristoff. Lily is still far away from being rescued by Zack or Arturo. Vamp City is still in danger from being destroyed. Humans, especially children, are still finding their way into Vamp City and extreme danger. The only difference is that more characters who are willing to work with Quinn are introduced, and there are surprises in regards to Quinn and Zack's descendants which hopefully will be discussed further in the next installment.