Welcome to Gizmos Reviews Virtual Blog Tour Stop for The Outside. Today's stop includes my review, thoughts on The Outside as well as some other interesting tidbits about the book and author.

Thanks for stopping by! 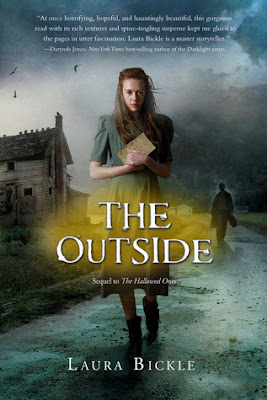 The Outside
The Hallowed Ones Book Two
Laura Bickle

One girl. One road. One chance to save what remains…

After a plague of vampires is unleashed in the world, Katie is kicked out of her Amish community for her refusal to adhere to the new rules of survival. Now in exile, she enters an outside world of unspeakable violence with only her two “English” friends and a horse by her side. Together they seek answers and other survivors—but each sunset brings the threat of vampire attack, and each sunrise the threat of starvation.

And yet through this darkness come the shining ones: luminescent men and women with the power to deflect vampires and survive the night. But can these new people be trusted, and are they even people at all?

In this edge-of-your-seat thriller, it’s up to one Amish girl to save her family, her community, and the boy she loves . . . but what will she be asked to leave behind in return?

Advance Praise for The Outside:

“At once horrifying, hopeful, and hauntingly beautiful, this gorgeous read with its rich textures and spine-tingling suspense kept me glued to the pages in utter fascination. Laura Bickle is a master storyteller.”

Praise for The Hallowed Ones

"This is a book to make you fear the shadows--a horrifying and gruesome tale of faith, and things that blink red eyes in the night. I began reading in the daylight, and read on into the late hours, leaning close, biting my lip. I could not look away; I was obsessed. Katie is an unbreakable soul."
—Lauren DeStefano, New York Times Bestselling author of the Chemical Garden Trilogy

"Tight pacing, suspenseful scenes, Wow! moments of tension, and exposure into a world I knew little about, The Hallowed Ones is an exciting, terse read. . . . Laura Bickle's debut novel for young adults has quickly become my favorite dystopian novel of 2012. . . . It left me wanting more, so much more."
—readergirlsblog.com

"Readers will find it hard to put down this suspenseful, scary, compulsively readable adventure."
—Kirkus Reviews

"Katie's an original character, and her thoughtful rebellion makes her an interesting addition to supernatural fictions's gallery of strong heroines."
—Bulletin


Upon finishing The Hallowed Ones last year, I was more than ready to finish this series by reading The Outside in hopes of more of the same; dark and creepy vampires, a determine heroine who attempts to stick to her faith and do what's right, and hopefully, an answer as to what really happened that created the vampirism that has spread world wide, and whether or not there really is a cure, or a way to stop vampire's from spreading.

The Outside picks up two weeks after the end of The Hallowed Ones. Our heroine, Katie, along with "English" Alex Green and Ginger Parsall, have been kicked out of the Amish community for refusing to adhere to the new rules by overbearing and uncaring Elders, and find themselves hoping to survive in a world that has been over run with vampires. The Outside is a terrifying place to be where it is only safe for Katie and crew to be out during the daylight hours. It is a daily struggled to find a hiding place, as well as food to survive on. Katie's faith is continually challenged when she has no choice but to turn to killing in order to remain alive and human.

I will say this for Bickle, she continually pushes the envelope and her characters are tried and pushed to the limits of their ability and it really is a challenge to remain alive, and not turned into one of the Darkness (Vampires). Katie faces challenges to her faith and whether or not it all matters in the end. Is she really a good person after she slays a vampire trying to eat her?

I think the romance between Alex and Katie is done very well. I think that Katie remains hopeful that just because she was kicked out of the Amish community, doesn't mean that she's a bad person or that God has turned his/her back on her for falling in love with Alex who isn't Amish. I think there is an underlying debate that happens over the course of this series between faith and science. I personally think it's a persons right to choose what they do or don't believe in, and it is nobody's business whether a person believes in God or science for that matter.

I won't spoil anything that happens in this book because that would be absolutely awful. I will say that things aren't exactly as they seem, especially if you have read the synopsis. There are some interesting things that happen, along with some possible surprises, as well as some scary scenes, and a possible way to finally fight back against the spread of vampirism. Will Katie, Alex, and Ginger survive until the end? Will the Amish community eventually welcome them back, or will they continually push them away? Read the book to find out folks! 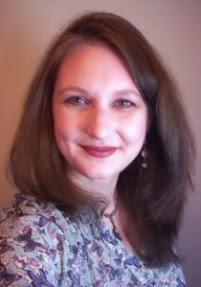 Laura Bickle’s professional background is in criminal justice and library science, and when she’s not patrolling the stacks at the public library she’s dreaming up stories about the monsters under the stairs (she also writes contemporary fantasy novels under the name Alayna Williams).

Laura lives in Ohio with her husband and six mostly-reformed feral cats.

The Presence of Evil
By Laura Bickle
“One does not sleep in the presence of evil. Not when you can see it and it can see you.”

This is one of my favorite lines from THE OUTSIDE. It’s from the perspective of Katie, a young Amish woman who is facing the end of her world. She’s been exiled from her community for failing to adhere to the new rules of survival. The world beyond Katie’s Amish settlement has been devastated by a plague of vampirism. Katie’s chief challenges are her own survival and protecting those she loves…and she’s surrounded by evil.

This is not the evil that she feared as a child. When she was younger, she was told that the world beyond the gates of her community was rife with temptation and vice. Human temptations and human vices. She was discouraged from participating in many of the things that those of us on the outside take for granted, things like movies, television, modern clothing, and makeup. Katie was always curious about these small transgressions, flirting with the thrill of the forbidden. But these are vanishingly small sins compared to the total darkness that has fallen upon the world.

The vampires Katie faces are creatures from old world legends, bloodthirsty and amoral. There is no velvet seduction in them, no struggling with the fate of their immortal souls. They simply want to feed, to devour the flesh of the living…and the survivors are dwindling in number.

Cities and nations have fallen, food for the vampires that seek flesh and blood for sustenance. There are no communications, no phones, no radio, no internet, no electricity, no transportation. Katie and two of her outsider friends struggle to find signs of human habitation on a lonely and desolate road.

And the shadows at the edge of the road are listening, watching, waiting for sunset. They wait until darkness to reach toward Katie and pull her down into the shadows with them, to make her part of the evil that has washed over the land.