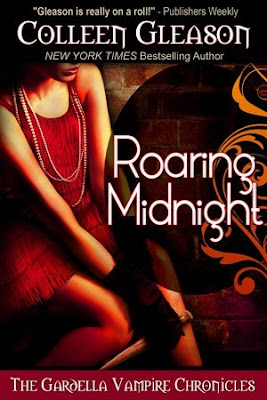 After I finished reading As Shadows Fade (The Gardella Vampire Chronicles #5), I was sad that the series had ended even though it tied up many, if not all, of the loose ends. For five books, I enjoyed the adventures of Victoria Gardella, Maximillan Pesaro, and Sebastian Vioget and hoped that we would eventually see a novella, or short story letting us get caught up on what happened to the three main characters. Gleason subsequently went on to write the Regency Draculia trilogy which I have not yet had the time to read.

When a book friend of mine on Goodreads started squealing loudly about a spin-off trilogy which would take place 100 years into the future during a time in the US known as the Prohibition, I was even more eager and intrigued to read Roaring Midnight. I was absolutely jumping for joy when it was leaked that Sebastian Vioget would be apart of this trilogy! There's a whole plethora of possibilities when it comes to Sebastian and what he's been doing for the past 100 years. After all, he made a very difficult choice at the end of As Shadows Fade, and has been trying to save his soul as well as that of his fated lover ever since.

According to Gleason's prologue, you really don't have to read the Gardella Vampire Chronicles in order to enjoy Macey's series. But, you are encouraged to do so. Roaring Midnight is a tale that surrounds Macey Denton aka Gardella. She's not unlike any other person in the world. She goes to work as a library assistant. She loves to go dancing in the latest flapper fashions. She tries to avoid anything to do with Al Capone and his merry men, and, she is absolutely clueless as to her heritage, and the fact that there are vampires among the humans in Al Capone's Chicago.

Roaring Midnight is Macey's coming of age story as a Gardella Venator, or vampire hunter as Gleason calls them and the fact that she's apparently a major player in the war on vampires like Victoria was before her. The Venator's themselves have a long history that goes back to the time of the Roman Empire. Men and Women have been called to become Venators, but there are some who have refused the Calling. I find the Calling rather interesting especially in Macey's case. It isn't until she meets Sebastian and a character named Chas Woodmore who pushes her and pulls her in order to get her to make up her mind about her future and her destiny that it all sort of falls into place. It also doesn't hurt when it appears the vampires are out for her destruction or to bind her to them.

Roaring Midnight had me on edge of my seat because Macey is a lot like Victoria in that she is absolutely arrogant, stubborn, determined, and an independent woman who doesn't like to be told what to do even when the truth is right in front of her face. Of course, Victoria just happens to be Macey's great, great Grandmother so the correlations and comparisons are sure to be made by readers.

For those who have read The Gardella Vampire Chronicles, we already know much about Sebastian. So, let me focus on Chas Woodmore. Chas is an interesting character and one that I had no idea who he was until I read past the Epilogue and learned that he was a major player in The Vampire Narcise. Does that mean that he will also be a major player in this trilogy as well? It's obvious that Chas has some issues that need to be resolved. He's definitely someone to keep an eye out for clues as to what happened to him in the past, and how he became a Venator. Chas is also determined to push Macey's buttons at each and every turn. Will that eventually mean that they will end up as bed mates? Only Gleason knows for sure.

Macey does have a sort of romantic entanglement with a reporter named J. Grady who apparently is very aware of the fact that there is something strange happening in Chicago and is rather eager to get to the bottom of it. I didn't like Grady. He was too pushy and too eager to get into Macey's business and the fact that Macey even considers him as a sex friend didn't do it for me. Also, as a fan of the original series, nothing good happens to mortals who find themselves mixed up with Venators and vampires. Just ask Victoria Gardella about her first husband.

The next book in the trilogy, Roaring Shadows, is “coming soon” or so it says at the end of the book. Obviously, I will be waiting for the release of Shadows to find out what happens between Macey, Capone, Chas, Sebastian, and whether or not Wayvern hangs around long enough to actually help Macey in her time of need or whether Macey's choice concerning her former best friend was a good or bad one. Can I just say in closing that I love the POOF's when vampires are killed?