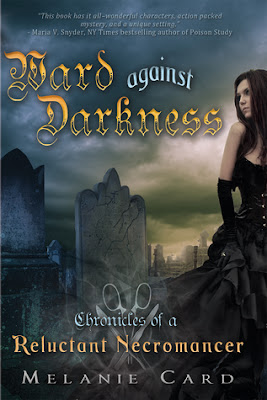 After a 2 year silence without a sequel to Ward Against Death (2011), Ward Against Darkness comes out swinging with action, suspense, and yet another personal dilemma for Ward  de'Ath to choose which course of action he should take. Having just read Ward Against Death a few days ago, it was easy to jump right into Ward Against Darkness without having any trouble understanding the world building, the characters, or remembering what previously happened to necromancer and trained physician Ward de’Ath and undead assassin Celia Carlyle.
Ward Against Darkness takes place nearly two weeks after Ward was given a job of raising Celia from the dead and found himself knee deep in kimchee barely escaping with his soul, let alone his life. Now, Ward and Celia have a price on their heads from the the criminal underworld of Brawenal City and are trying to reach a place where they can safely catch a break. Unfortunately, safety is far removed from the equation as they find themselves in the middle of a necromancer competition by a very powerful Dark Necromancer named Macerio and Ward and Celia are forced, yet again, to fight for their survival.Some random thoughts; If you have read Ward Against Death, you know who Tracker Nazarius is. If you haven't, then I suggest you go back to when they first met, and find who he works for. I ask you to do this because the SEER has designs on both Ward and Nazarius and I'm not sure what his end game really is. Ward has done some awful things in the past, and his past continues to haunt him.Ward is also a good person at heart but he doesn't always walk away from troubling situations where if he has the ability and power to help someone, he will do it even at the cost of his own life. He also has no clue as to how powerful he really is or that he is being played like a violin by the SEER and others. The one main complaint I had with Ward Against Death was the repetitiveness. It was YES WARD we know who you are. We know you are the fourth De'Ath can we just shut up and move on? That definitely changes for the better with this installment.I've found myself liking Celia and in Ward Against Darkness she comes through in a major way and even reunites with a former beau who wanted to marry her. Of course, there is the constant question about what Celia is after being raised by Ward, and whether or not she is really alive, or one of the walking undead. I truly wish this question would be answered soon. I don't much care for storylines that drag along like zombies shambling through NYC.I am keeping my fingers crossed that we don't have to wait yet another 2 years for the sequel to Ward Against Darkness. Supposedly, there will be another book. Expected publication: August 27th 2013 by Entangled Teen