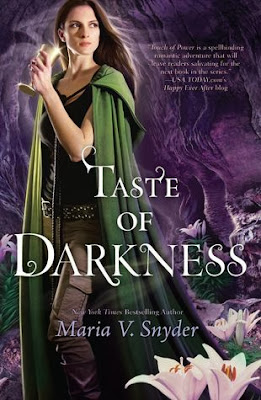 She's fought death and won. But how can she fight her fears?Avry knows hardship and trouble. She fought the plague and survived. She took on King Tohon and defeated him. But now her heart-mate, Kerrick, is missing, and Avry fears he's gone forever.But there's a more immediate threat. The Skeleton King plots to claim the Fifteen Realms for his own. With armies in disarray and the dead not staying down, Avry's healing powers are needed now more than ever.Torn between love and loyalty, Avry must choose her path carefully. For the future of her world depends on her decision.

*MY Thoughts*Maria V. Snyder's Taste of Darkness ends the Healer trilogy in a fashion that should leave readers pleasantly surprised and not wondering what the hell just happened. While you still have to wonder if your favorite characters will be spared by the often times used kill them off before they can reach the conclusion of the series feature, I can honestly say that this books ending won't leave you tossing the book in the bonfire or screaming in agony.I find myself wondering if I am a sadist since this is also the fifth story after Daylighters, Champion, Allegiant, and The Sharpest Blade, that I have read over the past week. All five novels have been the last book of their respective series. All five books gave readers some hints of despair and apprehension as to whether or not their favorite character, or couples, would survive and have their HEA. In most cases, the ending was expected, while a few others, had me hissing like a cat who doesn't want to be bothered with the silliness.Healer Avry of the Kazan Realm has been through hell and back ever since she went on the run more than 3 years ago and found herself being saved by Kerrick and his merry band of men known as the Monkeys (Loren, Flea, Belen, and Quain). She's died several times. She's been revived and become stronger for it. She's lost her entire family. She's gained unshakable allies and friends. She's come to learn about Peace and Death Lily's while fighting Tohon and his allies. Avry has become one of the most interesting characters that I've read about. She's determined, strong, focused, as well as putting herself in the danger to save those she cares for, as well as her own patients.Taste of Darkness takes an interesting trip that centers around Kerrick and his awakening abilities that come to light after he staggers off and is presumed to be lost after being stabbed with an infected blade. Kerrick has fought hard to be with Avry and their love has grown by leaps and bounds over this trilogy but there is never a dull moment when they can totally relax and let themselves have a happy moment. Avry is constantly in the middle of difficult choices, while Kerrick finds himself wanting to grab Avry and run off to distant lands in order to keep her safe. I can honestly say that I was not disappointed or put out over the challenges that Avry and Kerrick are forced to face in order to win the final battle with Tohon, Cellina, Sepp, Wynn, and a new nemesis known as The Skeleton King. I appreciated that Synder offered more than a few tender moments between the couple, while challenging them to their inner strengths and faults. I appreciated that there were moments when you were not sure who to trust, and the twists, and surprises, kept coming right to the end.I enjoyed watching the new challenges that Flea has with dealing with his new death magic abilities while also thankful that Papa Bear Belen finds himself back into the storyline right when things aren't looking all that clear for the Avry and the gang. I respected that Snyder didn't push a 3 way love triangle on readers even though clearly there was that temptation to push Kerrick aside for others like Sergeant Odd, or even Tolon.In the end, while perhaps not the strongest book that I have read by Synder, it was entertaining and filled with maneuvering that left me turning the pages as quickly as I could. On the negative side, I am puzzled why the decision was made not to break the book down by chapters, or even places where you knew who was the new POV. The sentences often times ran back to back from Avry's POV, to Kerrick's. You really have to pay attention or else you will miss the sudden switches. If this happens to be my only complaint about Taste of Darkness, I can absolutely live with it and move on.09/26/2013 Recvd via NetGalley - Expected publication: December 31st 2013 by Harlequin MIRA