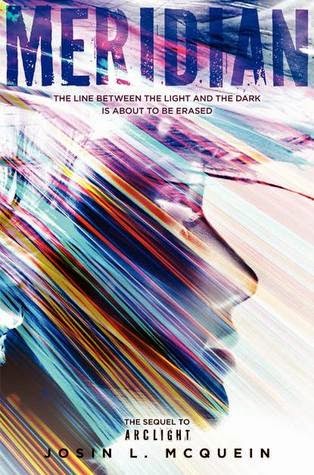 **I received this book for free from Edelweiss in exchange for an honest review. This does not affect my opinion of the book or the content of my review.**

*My Thoughts*As the sequel to Arclight, Meridian reveals more dark secrets of the past, more information on the Arclight's elders including Honoria, Lutrell, Mr. Pace, Lt. Sykes, and Dr. Wolff, new challenges/darkness for the future to come, and a twisted courtship between two men who are chasing after the same unique girl in Marina who has more than grown up as a character. Meridian, which takes place 2 months after the end of Arclight, is actually told in the POV's of Tobin and Marina this time around. In my humble opinion, I could have done without Tobin's view point, and hope that McQuein sticks with only Marina/Cherish the next time out. Tobin's POV was more or less unnecessary for the overall enjoyment of the story, and his behavior towards Rue and even Marina, really got my blood boiling. It was like watching a FIVE year old throw a tantrum, over, and over, and over again. His beef with Rue, has gone viral, and I'm not sure if I can take the churlish antagonism without pulling out my hair, and screaming.For Marina, the former Fade who was taken against her will into the Arclight by Honoria Whit and made human, not only has she made her choice in remaining human, and staying within the Arclight, she has become part of the inner circle of the Arclight. Her connection with Cherish is solid, and definitely something that is unique, and it also protects her from the darkness. I like the fact that even though they are separate personalities, Cherish is part of Marina, and keeps harmful memories away from her, allowing her to access them only when they are in danger. I do wonder how the connection will eventually play itself out. Will one FADE into history, or will they remain connected?I liked that the story went OUTSIDE the ARC and even the Gray this time around. I like that the Fade and Humans have a working relationship that is still tenuous in nature, but a necessary relationship for the humans survival. I like the fact that there are apparently more survivors, and I hope that we see more of them in the next installment even though they made things difficult for Marina and the Elders for a time.I liked how the Evil-Fade aka Killers, made their presence felt in a major way with not only Marina, but other characters like Annie, Trey, and Tobin. Needless to say, but I am eager to see who survives, and who doesn't when all is said and done since the ending leaves hints as to where McQuein is going in her next story. I am actually eager to understand the Killers even more than what was revealed in Meridian.I am hopeful that the twisted relationship that is Marina, Cherish, Tobin, and Rue ends in a positive manner. Although Marina apparently has made her choice in staying human, she still has a connection to Rue, Cherish, and her family and whether or not she remains human, or FADES again, should be very interesting to read about. I still say that Rue has done more to protect Marina, and the other humans than anyone else, and deserves some consideration.

I find it fascinating that there REALLY is a place called ARClight in New Mexico. I would love to spend a day visiting the facility, and seeing how the people there live. Please send me an invite! *01/06/2014* Recvd via Edelweiss* Expected publication: May 27th 2014 by Greenwillow Books