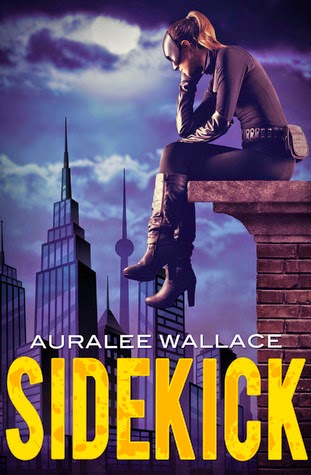 **I received this book for free from NetGalley in exchange for an honest review. This does not affect my opinion of the book or the content of my review.**

I have to you ahead of time that I may babble a little bit while reviewing this book. If you want to bypass the babble, feel free!

Admit it folks, you've always wanted to be someone other than yourself. When you were growing up, you either wanted to be cool like Veronica Mars, or a member of the Scooby Gang, or Buffy the Vampire Slayer, or perhaps maybe even the President of the USA. It is absolutely alright to want to be someone entirely different than your supposed career paths.

I come from an age where I thought Wonder Woman, The Bionic Woman, Cat Woman, Invisible Woman, Super Girl, Kitty Pryde, and Yes, even Buffy, were the cats pajamas! There they were larger than life on TV breaking down male stereotypes with their kick ass books, and outfits, while keeping the world safe from supervillains.

I continue searching for a way to change up my reading habits. I've been on the hunt for new and exciting authors who can bring a story to life, and entertain me when real life just plain sucks the morrow from my bones, and leaves me drained. Sidekick, by Australian Auralee Wallace, is my latest attempt at refreshing my reading tastes in a most enjoyable manner.

I have to say to you that this book is fun. It is entertaining. It has a heroine that is self-indulgent, undisciplined, reckless, pathetic, and has one of the most sarcastic attitudes you will find. But, you know what? I didn't care! I didn't care because the book (at 249 pages) was a quick read. It was filled with interesting characters, and a villain who you just wanted to punch in the face.

Our heroine is Brianna (Bremy) St James, is the daughter of billionaire Atticus St James. Bremy finds herself cut off from her money, her twin sister, and lifestyle she's become accustomed to all because she knows a terrifying secret about her father. She tries to keep her distance from her sister as well hoping that something exciting comes along. She is threatened by eviction and other more interesting things by her Russian landlord, and is told to find a job at a rather sexist place.

While being at the wrong place, at the wrong time, Bremy decides to take it upon herself to save the day; twice. Forget that the city already has its own heroine in Dark Ryder. Forget that she has absolutely no training whatsoever, or that if anyone found out who she really was, they would call her out for being a princess or worse. When Bremy's brain finally does kicks in, she decides that her new career goal is going to be SIDEKICK to the Dark Ryder! Here is where the secondary characters like reporter Pierce Stricklin, Bart, the MIT drop-out, Queenie, the rather abrupt next door neighbor, and Choden, teacher, and uncle to Dark Ryder come in.

If you are a comic book fan, you know that it is always in your best interest to suspend belief while reading stories like this. Belief suspended. I found it interesting that this story has been compared to a cross between Heroes and Bridget Jones. I can obviously see Bridget Jones in Bremy. Perhaps if we had more stories I could see the correlation with Heroes as well.

I really hope that there's a sequel to Sidekick, and its not just a standalone. OTHERWISE, I shall be forced to rethink this rating! I don't like leaving things in the air. I would love to see Ryder and Bremy working together like Batman and Robin. PLUS, I still need to see that a certain character gets their justice. PLUS, there is the whole romance angle that needs to be explored. PLUS, I love the whole Scooby Doo Gang feeling you get when you put Bremy's new allies together. So yes, Auralee, it is time to get back to work!