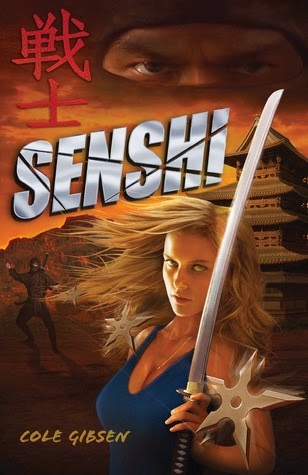 Senshi is the sequel, or middle book in the Katana series. Time line wise, it has been FOUR months since Rileigh Martin was nearly killed by her nemesis Whitley aka Zeami, and learned that she's the reincarnated fifteenth century samurai warrior known as Senshi.

Rileigh now wants a normal life, with normal dates with the boyfriend, Gimhae Kim (aka Yoshido), who had been the love of her life in a previous life. She still has no desire to work the Network or Dr. Wendall. She has friends in Michelle, Braden, Drew, and Quentin who keeps her busy. She also has the ability to manipulate KI energy which makes her unique and powerful.

What she gets instead is plenty of trouble from a new villain, betrayal, a best friend with some interesting abilities, her KI shows some interesting new twits and turns, and a nemesis who returns from the dead with a BIT of shocking news for Ri-Ri. What more can a girl ask for?

I said this in my previous review of Katana that I adore stories that featuring Katana's, samurai, ninja's, and feudal Japanese culture. I love the fact that Gibsen gives Senshi her back story this time around. She takes readers back to 1492 where we see the birth of a new sort of samurai, her meeting with the love of her life, and some interesting revelations that all connect to a character in the future who was more or less a tertiary character in Katana.

This is a dangerous story for Rileigh. Her best friend is acting out of sorts. She's attacked by ninja's at every turn. Her best friends (aka reincarnated samurai) and boyfriend suddenly treat her like she's a fungus that needs to be avoided at all costs. And, on top of it all, her former nemesis isn't trying to kill her, but team up with her to save the day and her life from the newest villain.

Senshi really is an action packed sequel to Katana. There is a whole lot more at stake this time around. I found the villain to be more devious and very driven to separate Rileigh from her happiness with Kim. Ri-Ri is definitely a different character this time around. She has accepted her ascension. She's working hard to control her KI, and she kicks ass and takes names when the sneaky Ninja try to end her and her friends abandon her.

I have to say that probably the most interesting character this time out is Quentin. Quentin who is the stereo-typical Gay best friend who feels left out now that Ri-Ri has new friends. BUT, hold your horses everyone! Quentin is absolutely NECESSARY for this sequel and the story is actually better than Katana because of his actions.

There is a wild ending to this book, that obviously ties into the final installment called Shinobi that released March 8, 2014 by Flux. Since I already have that book on my Kindle, it will be only a matter of days before I am reading it.

Posted by Shelley Romano at 8:01 PM