*Gizmos Book Reviews* Shadows on the Moon by Zoë Marriott 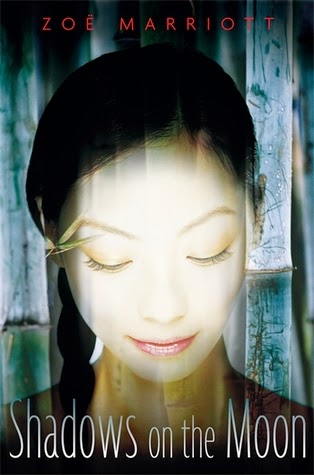 Shadows on the Moon has been on my radar ever since a few bloggers I trust recommended it to me. I really do appreciate those recommendations folks! Shadows on the Moon is being praised for being a Japanese take-off of Cinderella, but it is so much more than that. The world that Zoe Marriott created is a fictional feudal Japan style country known as the Moonlit Land. Since I love fantasy novels set in feudal Japan, I eagerly anticipated liking this story, and I did.

Sixteen-year-old Suzume is the narrator of the story, and her journey to find justice for her family is one that readers of all ages should take note of. As a Fourteen-year-old, Suzume Hoshima's world was destroyed when her father was accused of being a traitor, and then killed. In the process of escaping the soldiers, she also loses her cousin/adopted sister Ami who tried to protect her from the soldiers. Suzume escapes using an unknown ability called shadow weaving. I would say that Suzume's mother Yukiko also survived the attack, but I would be leaving out a major chunk of the storyline, and I don't really wish to spoil the book for future readers even though it has been out since 2012.

Right from the point where Suzume's father and cousin are murdered, and a Cinderman named Youta comes into her life and explains what being a Shadow Weaver really means and tries to protect her from harm, Suzume only has one thing on her mind: revenge for her father and cousins deaths. Suzume goes through a transformation which is written in THREE parts. First, of course, there is Suzume the timid child who has to grow up fast after being taken away from the only home she's ever known thanks to her mothers new betrothal to her fathers supposed friend. Then, there's Rin the dredge who runs into Akira Kano who transforms her into Yue-San Kano, the beautiful singer who catches the eye of the Moon Prince, and later learns the full power of her shadow weaving abilities.

Suzume deals with a whole lot in this story, some of it because of her own silly choices, other times it's because of her mother and her new husband Terayama take her choices away from her and force her hand. One of the more shocking scenes is when Suzume starts cutting herself in order to resolve the anger and frustration that lies within. This isn't just a brief moment in time. Suzume finds it easy to let out her frustration levels by cutting her skin. It really only levels off after she meets Otieno, the foreigner she calls beautiful, and finds a unique connection to. Even though Suzume and Otieno are basically made for the other, Suzume still needs to resolve her own issues, and find revenge so that she can move on with her life and find happiness.

Recently, there has been a whole lot of conversations going on about the need for more diversity. Personally, I think it's a whole lot of silliness, especially if you don't trust yourself to read outside of your comfort zones, and authors continue to write from the perspective of the white main character, instead of exploring outside the box. I am not saying that you should stop reading in your comfort zones. Hell, I still refuse to read BDSM, and M/M novels because they make me uncomfortable. I also don't read a whole lot of pure Romance novels because I am a person who enjoys action, adventure, blood, gore, and kick ass heroines.

Shadows on the Moon not only has a Japanese main character in Suzume, but presumably a black African secondary love interest in Otieno, and a character who is an "oyama" or male actor who plays female roles and becomes Suzume's saving grace in Akira. I found the whole shadow weaving aspect to be highly entertaining. I found Suzume's story to be intriguing, and sad at the same time. I can't imagine the betrayal that a teenager is forced to face, and then having to face life without the one person that was supposed to protect you, and raise you, and give comfort to you in times of need.

Shadows on the Moon is a refreshing story that gives me a chance to explore new authors, and new characters I would not have thought of before. I would definitely recommend this book to anyone who loves Fantasy, or Feudal Japan.