*Gizmos Book Reviews* The Truth About Alice by Jennifer Mathieu 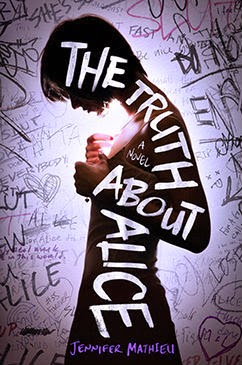 **I received this book for free from NetGalley/Roaring Brook Press in exchange for an honest review. This does not affect my opinion of the book or the content of my review.**

The Truth About Alice is inspirational, heart breaking, emotional, compelling, and a story that ALL TEENS should be required to read before they enter High School and lose their damn minds over their social status or losing friends that they've had their entire lives. It is a hard subject to read about, but one that nobody should feel squeamish about reading, or passing on to their friends, or recommending to others who may not think that the story isn't for them.

The Truth About Alice will break your heart into a million pieces, and then slowly mend your broken heart with a character who is brave, courageous, and someone I wish was my best friend so that I could give her hugs and support, and block her from experiencing this nonsense ever again. Although we really truly do not get Alice's POV until the end, or learn the truth about what really happened on the night things truly went to hell for her, she's still a strong presence that can't be ignored, or pushed to the background.

I absolutely adore this quote, "There is one thing I’ve learned about people: they don’t get that mean and nasty overnight. It’s not human nature. If you give people enough time, eventually they’ll do the most heartbreaking stuff in the world." Quote from Alice

The Truth About Alice is told by several KEY players who all gang up to destroy an innocent girls life, and make her a social pariah. It is a story about how one day you can be popular and have tons of friends, and then it is all taken away from you with pitiful lies, jealously, spite, backstabbing, bullying, and lack of human compassion, or understanding. Through the eyes of each character, we see the intentional use of lies, and spite, in order to crush someone over something that could have been prevented right from the start had someone just stopped and SPOKEN UP, and TOLD THE TRUTH instead of exacerbating the problem!

There is the ever popular, conceited, vicious, vile, opinionated Elaine O'Dea who had an on-again, off-again relationship with Brandon Fitzsimmons, the person at the center of Alice's fade into obscurity, and the one person who like Alice, is never far from anyone's mind. Elaine's insecurities turned her into a Green Eyed Monster willing to do anything, and everything to destroy Alice. I think the world has too many people like Elaine, and not enough people like Alice who even though her world was crushed, she still managed to continue going to school, and putting up with all the bullshit.

Kelsie Sanders is probably the character that I found the most repulsive. The one character who should have stood shoulder to shoulder with her best friend and made sure that she was OK. But, instead she turned her back on Alice, drove the final nail into Alice's coffin with her ULTIMATE betrayal, and absolute disregard for anyone else's feelings but her own. Honestly, we're supposed to forgive people, and move on, but Kelsie doesn't get my forgiveness.

Josh Waverly is Brandon's best friend, and perhaps a bit more. Because of his LIE, Alice's downward spiral continued unabated. Telling someone in authority that Brandon's death was all Alice's fault for inappropriate texting, made Josh the true ASSHOLE of the story. Josh and Kelsie would make the perfect couple in that they just didn't care who they hurt, or why. They could probably hurt each other, and still find a way to keep their heads held high.

Kurt Morelli is the school's biggest "weirdo" because of his intelligence, and the fact that he's pretty much without any friends. He is socially awkward, but offers to tutor Alice who he pretty much had a crush on. Kurt was the only one still talking to Alice, but he too had some secrets that needed to be revealed in order for Alice to start the healing process. I'll forgive Kurt because he at least continued to try helping Alice when the rest of her school tore her down.

Jennifer Mathieu really does a good job of getting inside each characters head, and giving readers an up close look at high school shenanigans and the need to stop bullying in its tracks. I will say that this is the perfect situation to explain why girls can be just as cruel, or crueler than boys. Girls don't really care who they hurt as long as they remain popular. As I said before, the entire situation could have been handled differently had just ONE person had stood up and said STOP, this is all bullshit!