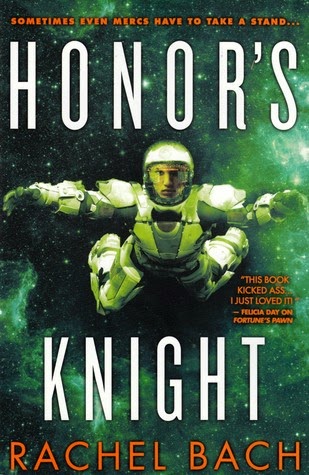 **I received this book from NetGalley / Orbit in exchange for an honest review. This does not affect my opinion of the book or the content of my review.**

Devi Morris has a lot of problems. And not the fun, easy-to-shoot kind either.

After a mysterious attack left her short several memories and one partner, she's determined to keep her head down, do her job, and get on with her life. But even though Devi's not actually looking for it -- trouble keeps finding her. She sees things no one else can, the black stain on her hands is growing, and she is entangled with the cook she's supposed to hate.

But when a deadly crisis exposes far more of the truth than she bargained for, Devi discovers there's worse fates than being shot, and sometimes the only people you can trust are the ones who want you dead.

Honor's Knight, the second installment in the Paradox trilogy, continues Paradoxian mercenary Devi Morris's story. The story picks up right where Fortune's Pawn left off and that is a good thing since Fortune's Pawn left us with an interesting cliffhanger that left me glad I had the next book at my disposal.

Devi Morris has maintained that if she obeys orders, climbs the ladder quickly, and keeps an eye out for the prize, she will one day become one of the elite Devastators. Since becoming a security officer on the Glorious Fool to manage that goal, she has discovered a whole new reality, new threats, and more danger than she can shake a stick at. As the story starts, she can't remember important things because of Rupert's memory wipe in order to save her life. Because of the memory wipe, every time she looks at Rupert, she gets nauseous and can't remember that he is more than just the ships cook.

At the same time, she experiences hallucinations; the virus that she picked up on the xith'cal space ship causes parts of her body to turn black, and it grows with Devi's intensity. She sees glowing things that only her and the daughters of Maat are able to see. Because of what she has at her disposal, she is also the main link to defeating a force that can't be seen until they are attacking the ship, or planet you are on. She also has to survive alien factions that want to kill her on sight.

Never fear my dears, Devi doesn't let a little things like forgotten memories, or ancient enemies, or being a major target by several different parties get her down. She strives ahead, picks up a new security partner, is targeted yet again by the attacker who got away, and learns more about the creation of Maat's daughters and why they are important to Caldswell's fight he's been waging for decades.

There is a moral question to think on as well. How far would you go in order to save a planet, a species, a galaxy of humans who are under attack? Would you willingly sacrifice your own daughter in order to save billions? How far would you go to prevent this from happening, and would you have the strength, courage, and determination to do what is right, and not what is popular? Would you be willing to sacrifice yourself in order to keep what's in your veins away from people who want you dead?

I'm happy to report that there IS no letdown when it comes to Honor's Knight. There is still plenty of pulse pounding and heart racing action that puts Devi in a class of her own. There are questions as to who the real bad guys are, and who is on Devi's side fighting with everything she has available to her, but all shall be revealed my impatient readers. Normally, I have issues with sequels because they don't explain things well enough, and thus leaves more questions for the final novel in the series. Honor's Knight is definitely on par, or better than it's predecessor.