*Gizmos Book Reviews* One Past Midnight by Jessica Shirvington 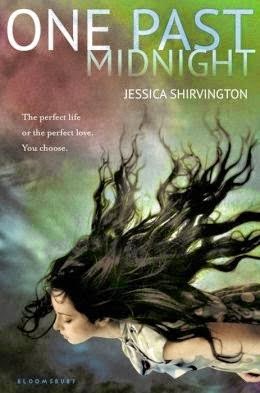 **I received this book from NetGalley / Bloomsbury USA in exchange for an honest review. This does not affect my opinion of the book or the content of my review.**

Above all else, though I try not to think about it, I know which life I prefer. And every night when I Cinderella myself from one life to the next a very small, but definite, piece of me dies. The hardest part is that nothing about my situation has ever changed. There is no loophole.

Until now, that is... For as long as she can remember, Sabine has lived two lives. Every 24 hours she Shifts to her ′other′ life - a life where she is exactly the same, but absolutely everything else is different: different family, different friends, different social expectations. In one life she has a sister, in the other she does not. In one life she′s a straight-A student with the perfect boyfriend, in the other she′s considered a reckless delinquent. Nothing about her situation has ever changed, until the day when she discovers a glitch: the arm she breaks in one life is perfectly fine in the other.With this new knowledge, Sabine begins a series of increasingly risky experiments which bring her dangerously close to the life she′s always wanted... But just what - and who - is she really risking?

One Past Midnight (aka Between the Lives), is the story about Eighteen year old Sabine. Sabine lives the life of two very different people but maintains all the memories and experiences she's faced along the way. Sabine version # 1 lives in Roxbury (part of Boston), Massachusetts with her parents and adorable little sister Maddie who I just wanted to cuddle and not stop. She has her best friend Capri, and occasionally helps her parents out in their Pharmacy. Except for missing Maddie like crazy, she really isn't all that eager to return to Roxbury when her 24 hours are up in the other reality.

Sabine # 2 lives in Wellesley (also a part of Boston), Massachusetts with her mother. She has two older brothers Ryan, and Lucas, best friends Miriam and Lucy, and a boyfriend Dex who is to die for. In other words, Sabine # 2 has a much easier life than Sabine # 1. She doesn't want for anything, except perhaps a better relationship with her brothers. And, she's already been accepted to Harvard. She is also lucky in that neither world has ever crossed.

Every 24 hours Sabine shifts between the lives. In one reality, she can speak flawless French, while in the other, she has to becareful of letting on to anyone that she's living parallel lives. Sabine has been trying for years to see if things would change from one life to the other. When she accidentally breaks her arm in reality # 1, Sabine starts to experiment with ways to stay in reality # 2. When her experiments go off the rails, and she's sent to a mental hospital by her parents, she meets the one person who will change her outlook on living and making a choice between the realities; Ethan.

This book has been labeled as a psychological thriller in some circles, science fiction in others. I prefer this as more of a science fiction story since Sabine travels between realities. That is something that doesn't necessarily happen in Psych Thrillers. I also must say that the last part of this book went through me like a knife cutting through water because of the content that was written.

Sabine's relationship with Ethan is very emotional, and really the reason I have only positive things to say about the story. I will fully admit to crying at one point in the story, and no, I will not say which part. Ethan's arrival into Sabine's life could not have come at a better time for either character. He opens her eyes, let's her understand that it doesn't really matter that she has separate lives or not, and she gives him someone he can be himself around..Ethan truly believes that Sabine just has to live her lives as fully as she is capable of, and the best of her being. He also opens up her eyes to her so called relationship with Dex that people believe is just perfectly adorable. The romance between Dex and Sabine is definitely one that will be a crowd pleaser.

I think certain content in this story may be a bit much for a younger crowd to handle, but I leave that up to the parents. Any time you have a situation where someone starts thinking about suicide, or harming oneself, there should be someone alongside to explain why this character feels it necessary. There is also a very abrupt scene where Sabine faces a harsh reality. One needs to definitely talk these situations out, and explain that this isn't normal behavior for anyone.

One Past Midnight is definitely an entirely different world from her Violet Eden series. Sabine is definitely NOT Violet. She is still human regardless of the fact that she shifts between realities. One shouldn't go into this story looking for similarities. One should just enjoy the authors writing, and bask in the fact that we are living in an age where we have so many awesome writers putting out enjoyable stories for us.