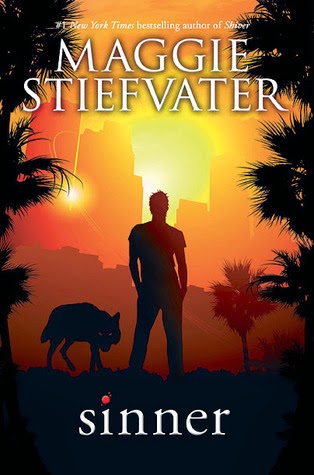 **I received this book from NetGalley / Scholastic Press in exchange for an honest review. This does not affect my opinion of the book or the content of my review.**

Sinner follows Cole St. Clair, a pivotal character from the #1 New York Times bestselling Shiver Trilogy. Everybody thinks they know Cole's story. Stardom. Addiction. Downfall. Disappearance. But only a few people know Cole's darkest secret -- his ability to shift into a wolf. One of these people is Isabel. At one point, they may have even loved each other. But that feels like a lifetime ago. Now Cole is back. Back in the spotlight. Back in the danger zone. Back in Isabel's life. Can this sinner be saved?

If you've read the first three novels in the Wolves of Mercy Falls series, (which I truly hope you have) then please continue reading this review. If not, please consider this your ONLY warning that there might or might not be mild spoilers involved.

Maggie Stiefvater's Sinner is a standalone novel that features two of the more intriguing characters from The Wolves of Mercy Falls series; Cole St. Clair and Isabel Culpeper. Both Cole and Isabel have had their turn in the spotlight along with Grace and Sam, but this time out, it is THEIR romance that gets the chance to shine, or crash and burn.

Traveling to Los Angeles where dreams became nightmares, Cole is hoping to become an entirely different person while not allowing himself to fall back into substance abuse hole that drove him to fall out of the public's eye for 2 years. He wants to redeem himself after he nearly lost everything. He agrees to star in a reality based TV show, while writing new music for a possible album. Along the way, he reunites with a former band mate Jeremy, becomes friends with Leon who is more of a father figure than his own father, all while keeping his mind on the prize; Isabel.

By reading the Wolves of Mercy Falls trilogy, readers learned that Cole was turned into a wolf by Beck along with Victor, his former drummer in the band Narkotika. Sine then, Cole has learned how to quickly shift into a werewolf and back again unlike Sam and Grace. Cole has had an interesting life as the lead singer of Narkotika which lead to fame and fortune before crashing to earth like a meteorite. One thing that has never left Cole, however, is the reality of what he did when he was out of control.

Six months after the tragedy that forced her to move from Mercy Falls to Los Angeles, Isabel works in a chic store and studies her way towards one day becoming a doctor. Isabel was introduced as Jack's sister in Linger and was also one of the protagonists in Forever. Isabel was the driving force that allowed Sam to find a cure for being a werewolf. Isabel is disengaged from everyone, and has no real friends. She is a hard case, and a bit on the abrasive side. So, when Cole shows up at her work, she is perhaps a bit shocked than anything else.

The romance between Cole and Isabel is a rollercoaster ride filled with emotional turmoil, angst, silly and crazy mistakes, and perhaps a bit of insecurities on both sides. As a friend told me while discussing this story, Cole's transformation into werewolf replaced his addiction to drugs. Whenever he finds himself deep in depression, he quickly finds a way to shift hoping the wolf would take his worries away. So basically, he's changed one addiction to another.

For fans of Shiver, Linger, and Forever, Grace Brisbane and Sam Roth both appear like a blip on your radar screen, and then they are gone. This is perfectly acceptable and fine with me since they had their own books, and their story was told. Steifvater gave us an interesting yet unresolved ending, so therefore they didn't need to be focused on this time around. Sinner's ending is pretty much as expected, and more of a contemporary romance novel than one steeped in the paranormal.