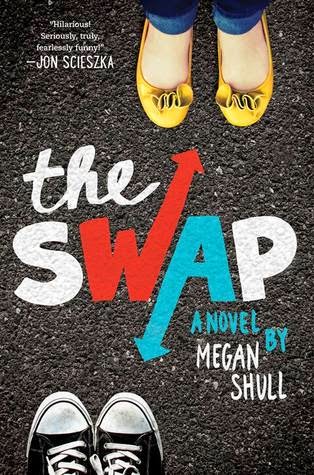 **I received this book via Edelweiss/Katherine Tegen Books in exchange for an honest review. This does not affect my opinion of the book or the content of my review.**

“YOU BE ME...AND I'LL BE YOU.”ELLIE spent the summer before seventh grade getting dropped by her best friend since forever. JACK spent it training in “The Cage” with his tough-as-nails brothers and hard-to-please dad. By the time middle school starts, they’re both ready for a change. And just as Jack’s thinking girls have it so easy, Ellie’s wishing she could be anyone but herself.Then, BAM! They swap lives—and bodies!Now Jack’s fending off mean girls at sleepover parties while Ellie’s reigning as the Prince of Thatcher Middle School. As their crazy weekend races on—and their feelings for each other grow—Ellie and Jack begin to realize that maybe the best way to learn how to be yourself is to spend a little time being someone else.

"If you believe it, you can achieve it." from The Swap ARC

I never thought I would start a review by saying that The Swap is absolutely adorable, and Megan has broken all my preconceived notions on what a Middle Grade novel should be. I don't personally know Megan, but I will say that I am proud that she's from the place where I grew up, and where my family still lives. It's nice to see a small town girl do so well. It gives the rest of us hope that one day we too can live our own dreams.

The Swap follows 12-year old Ellie O'Brien and 13-year old Jack Malloy. Each character has a story to tell. Each has challenges they have to face. The story flips back and forth between Ellie and Jack, and readers get a birds-eye view of what each character is experiencing. You can feel the heart break, as well as the change in each character after they've walked a mile in someone else's shoes.

One of the cruelest facts of being human, is that you face your fellow mankind on a daily basis and more times than not, they don't care if they break your heart, or kick you when you are down, or care that your heart is broken into pieces. For Ellie, losing her so called best friend right before starting 7th grade and then facing daily ridicule and scorn, would have broken down even the strongest person.

Ellie has so much going for her, including an incredibly awesome mother, but she can't see past the betrayal or the hurt. She can't see that she actually has OTHER friends who think the world of her, and nearly gives up the one thing she is awesome at...soccer. That is, until she wakes up in the body of the Prince of Thatcher Middle School Jack Malloy, and realizes that everyone has their own problems. It's just how you handle them that makes you who you are.

I loved Jack. He is one of the more genuine, and yes, adorable characters that you will find. He doesn't have to fake being nice, he is nice to everyone. I loved Jack's three brothers. Not having any brothers myself, I definitely missed out on the shenanigans, the camaraderie, and rivalry. They may mess around, but when it's all said and done, they genuinely care for each other. Jack's father isn't necessarily a bad gent, he just wants the absolute best for his kids, and that means pushing them to giving their all, all of the time.

There have been more than a fair share of body swapping stories going back to Big, right through Freaky Friday. But, I don't remember a story that switches bodies between a teen boy and a teen girl. I will say that Megan does a good job of putting the reader into each characters shoes, and that's really a hard thing to do. I truly wish there wasn't the need for mean girls, or bullies in stories, but that wouldn't be realistic. It would be like pretending that bad things don't happen to good people, when it really does.

The Swap gave me all sorts of feelings. I was laughing, and yes I was crying. I was emotionally connected to both characters, and ended up grinning like a fool at the end. My only hint of grumbling came at the mysterious nurse, and the fact that we never do hear from her again. Would her reappearance have made this book any better? I'm not ready to say one way or the other. Just kind of a curious facet of the story.

I absolutely loved Ellie mother Summer. She's faced her own challenges, but never once walked away from her daughter, or stopped loving, or supporting her. Even Jack came to find Summer to be awesome. I respect the message that Megan has written. You do, actually, have to look in the mirror and like the person you see looking back before you can expect anyone else to do the same. You have to choose your friends for what they can offer you, IE safety, comfort, a shoulder to cry on, and someone who will stand alongside you when the mean girls and bullies try to take you down.