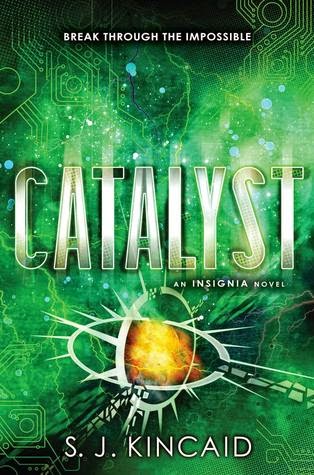 **I received this book for free from Katherine Tegen Books via Edelweiss in exchange for an honest review. This does not affect my opinion of the book or the content of my review.**

This exhilarating, explosive, and heartrending conclusion to the Insignia trilogy brings Tom and his intelligent, passionate, and brave young friends stunning tests and dangerous confrontations and through to an impossible future they could never have predicted.Tom Raines and his friends are eager to return to the Pentagonal Spire to continue training for the elite Intrasolar Forces, but they soon discover troubling changes: strict new regulations and the revelation that the Spire is under new military control. What begins as an irritating adjustment soon reveals a dangerous shift in reality. Those now in control are aligned with corporate sponsors and their ruthless agendas. And when the military academy begins welcoming new cadets with suspicious neural processors, the first step in a plan with horrifying worldwide ramifications, Tom is desperate to stop it, even if that means keeping secrets from his closest allies.Then a mysterious figure, the other ghost in the machine, begins fighting against the corporations, but with methods even Tom finds shocking. And when the enemy comes for Tom, how much can Tom endure in the battle to save himself? He must decide if he can still fight when the odds of success seem to be sliding from his grip.

CATALYST brings an end to the INSIGNIA trilogy, and sends our hero, Tom Raines, off into the sunset where he definitely deserves a much need vacation. Tom is once again joined by his gang of misfits/friends; Vikra Ashwan, Wyatt Enslow, and Yuri Sysevich. CATALYST is by far the darkest novel of the trilogy, and Kincaid doesn't leave anything on the table.

Kincaid doesn't hold back on ways to break Tom down until he is at the end of his rope. Tom can't catch a break, even on vacation. Not when his father discovers that he has had a neural access point built into his brain. Not when the NSA becomes keenly aware and interested in him after his stunt at the end of VORTEX. He can't even catch a break when he returns to his "home" and finds that a major shift has happened while he was away.

Traveling back to the Spire a week after everyone else has already returned, Tom quickly learns that his carefree days of goofing off, and ignoring orders of his superiors comes with consequences. He is also "punished" by being named leader of his own group of plebes who have all been given a brand new neural processor that allows for no deviation from programming.

But, it is Tom's ongoing battle with nemesis Joseph Vengerov that sends Tom and this story into darkness. Vengerov is a megalomaniac with a sociopathic personality who truly hates Tom for his past actions. Tom is the one person who hasn't fully backed down to him, and that just causes him to be more creative. He really doesn't care who he hurts, or kills, as long as he becomes the top of the pyramid and kills off all challenges to his crown.

I like Science Fiction stories, a fact that I have stated more than a few times. I can see the comparisons being made with Ender's Game. After-all, you have a bunch of teenagers who have the power at their finger tips to unleash hell on earth. With Tom, you have a 14-year old social misfit (17 or 18 by the time the story ends), thanks to his father, who ends up becoming a player in a world where the stakes are extremely high.

Tom has had more than a few challenges since joining the Intersolar program. One of his many challenges has been with the girl known as Medusa who has the same abilities as he does. I won't spoil this book, or Vortex by telling you what happened between the two characters. Let's just say that I am happy with the overall relationship results of Catalyst, even though the story could have perhaps ended a little bit differently when it came to Tom's romance.

One of the more interesting dynamics of CATALYST, is Tom's relationship with Lieutenant Blackburn. Readers have known that Blackburn isn't the nicest guy you will ever meet and hasn't exactly been Tom's favorite person. YET, when you understand his background, and what happened to him, you kind of want to see him succeed in his goals. I was surprised, but not shocked to learn Blackburn's secrets, and the fact that he almost seems more like a human, rather than a monster he has been portrayed as.

I will say that, on a personal level, I felt really bad for Tom while reading CATALYST. I like the kid, what can I say? Yes, he makes plenty of mistakes, and acts like a fool most of the time. But, I also like the sarcasm. I like his friendship with Vik. You can always count on a laugh or two when these two are together. I even liked Wyatt who is probably the strongest character in the trilogy. I like the way Tom finds a way to gather a group of friends together, and saves the world time and time again but never brags about doing so. The one thing that bugged me in a small way, was the fact that while his friends were enjoying promotions, Tom was left behind once again.

I think CATALYST ends in a way that makes perfect since. I don't see how Kincaid could have written the ending any differently and not left readers out on the ledge wondering what will happen next. If you are looking for answers not only about Tom's past, but Blackburn's, you have come to the right place. Please make sure you read Insignia, and Vortex first before diving into Catalyst!