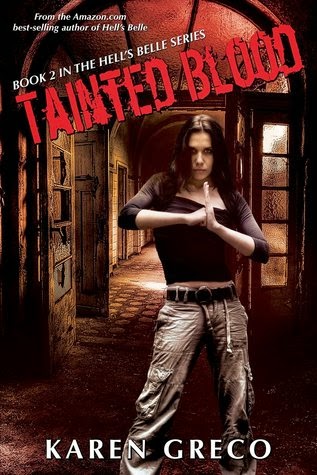 **I received this book for free as part of the Tainted Blood Blog Tour in exchange for an honest review. This does not affect my opinion of the book or the content of my review.**

After surviving a vampire assassin (not to mention an awkward affair with a hot FBI agent that ended worse than she could have imagined), witch/vampire hybrid Nina Martinez is reunited with the full Blood Ops team in Providence, Rhode Island. Her Aunt Babe is tutoring her in all things witchcraft, and her vampire partner Frankie is enjoying the benefits of daywalking, courtesy of a demon spell.When a segment of the Rhode Island vampire population is marked for death by a tainted blood supply, Nina and her team race to find Patient Zero before the local vampire population is wiped out. But when a demon infestation threatens to take control of the city, Nina must join forces with newly elected mayor—and closet demon— Ami Bertrand before the city falls into ruin.Filled with fast-paced, edge-of-your-seat action, Nina and her group of supernatural misfits battle a surprising new enemy that threatens their very existence.No wonder she still can’t get a date.

Tainted Blood (Hell's Belle #2) features mixed blood (witch/vampire) Nina Martinez and her Blood Ops teammates who go after rogue supernaturals and put them down once they step out of line. Nina's teammates include her partner of many years Frankie Montefeltro (700 + year old vampire), Dr. Lochlan O'Malley (Druid), Darcy (Banshee), and the newest addition, FBI Gang Expert Max Deveroux (Beserker) who joined the team after making a deal with a demon.

Providence, Rhode Island has a problem. It has not only become a beacon for the supernatural community under Mayor Ami Bertrand (Demon), but a portion of its vampire community is being targeted by a tainted blood supply that causes them to riot. The so called Beta vampires, who don't drink blood from live humans, are dying at an alarming rate, and their blood is highly toxic to other vampires. It is up to Nina and her Blood Ops team to discover who is responsible and why before things get out of control and an even deadlier problems pops up.

When not saving the world from rogue supernaturals, Nina is a bartender and part owner of Babe's. Her Aunt Babette (Witch) has tried teaching Nina about her witch powers that revealed themselves after nearly dying in Hell's Belle. But, Nina hasn't caught up to where she should be, which means that she's a stronger vampire than she is a witch. Her vampires powers have manifested since being stabbed with a witch blade. Nina, does, however, have the ability to see and talk to ghosts, and control the weather, mostly.

Nina and a ghost she calls Casper, are like two peas in a pod, and together they are able to do remarkable things with magic and spells. It is obvious that even though Nina has a very long way to go before she truly understands her true potential, there's something mysterious about her heritage that makes people gravitate towards her. Tainted Blood isn't necessarily an action filled story, but there are mysteries and powerful villains just waiting to cause more havoc for Nina and the rest of the supernatural community.

I often times speak of my dislike of love triangles, and that remains true today. Nina and Frankie are a team, and perhaps much more now that he saved her life. However, Max apparently isn't going away any time soon, and his feelings for Nina haven't lessened any since he first came on the scene in Hell's Belle and sold his soul to a demon. In the end, it would absolutely surprise me if Nina ended up with anyone else but Frankie.

Tainted Blood is apparently not the last story in this series since Greco leaves us with a rather drastic, if not stunning cliffhanger ending that changes almost everything Nina has come to believe in and fight for. As much as I admire Nina's strength of standing up to others, and not putting up with others BS, she definitely needs to find not only her magic, but the secrets behind what makes her so different from others, along with gathering new allies that will have her back when the shit truly hits the fan.

I do hope that there's a third novel in this series, and it doesn't get abandoned due to sales, or what-have-you. I do believe we need to wrap up the story in such a way that Nina and her crew are given every opportunity to shine and once again, save the world from devious villains. Greco also gives readers a short novella called River Vamp which starts right after the ending of Tainted Blood. The story actually takes place 12 years before Hell's Belle.