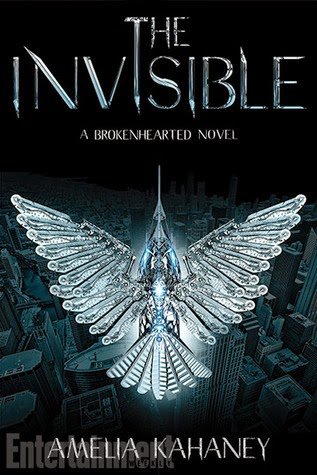 **I received this book for free from HarperTeen via Edelweiss in exchange for an honest review. Thank you!! This does not affect my opinion of the book or the content of my review.**

Taking up where The Brokenhearted ended, the sequel finds Anthem Fleet attempting to return to a normal life after an experimental surgery that left her with a bionic hummingbird heart and a terrifying new strength. But she can’t shake her suspicions about her father’s connection to the Syndicate and she can’t ignore the cries of help in the crime-ridden city of Bedlam. She finds new promise in her relationship with Ford, but after his lifesaving surgery, the Ford Anthem knew slips away. When a mysterious new group called “The Invisible” starts attacking the privileged North Siders, Anthem has to step up and be the New Hope that Bedlam needs, or Bedlam will fall…once and for all.

Would be super-heroine Anthem Fleet is back in this sequel to the Brokenhearted. Anthem is the girl with the bionic hummingbird heart that gives her enhanced speed, strength, and sonic hearing. Anthem has definitely become someone Bedlam can root for. In fact, she's affectionately called The New Hope. Having made a major dent in the operations of the Syndicate, Anthem still searches for the so called MONEY man behind the Syndicates operations, and doesn't exclude the fact that her father may be involved.

But first, she has to deal with a group calling itself The Invisible. The Invisible, not unlike Occupy Wall Street, seems to hold a major grudge against the wealthy of Bedlam and are willing to break the law in order to make their point. Their so called "pranks" turn deadly and Kahaney is not afraid to kill people off to show how out of control these people truly are. As the story rolls along, so does the violence perpetrated by the Invisible to the point where I found myself not really feeling any sort of compassion for their goals, or causes.

Anthem's identity also becomes a point of contention in this story thanks to a major betrayal, which leads to a surprising twist, and an shocking death. I truly would have liked this story a bit more had Anthem, or Ford, or even Jax, designed a suit for her to wear instead of just a simple hoodie and mask. I think expecting anyone to truly keep her identity when the stakes are high, is a bit ridiculous.

While Anthem is trying to find a way to stop the Invisible, her relationship with Ford flip-flops. Ford has changed so much after being shot in the Brokenhearted. In the beginning, he's frail, he doesn't get out as much as he should, he's not boxing, something that he loved until the Syndicate interfered, and he pushes Anthem away when she needs his help the most. I was saddened by these turn of events. I like Ford and Anthem together. They make an excellent team, not unlike Batman and Robin. Thankfully for me, Ford eventually gets his head out of his anus, and makes things right.

There is a back story to The Invisible that clears up some mysteries surrounding Harris Fleet, Anthem's real mother, and the original Hope of Bedlam that Anthem is being named after. I guess when you are attempting to tie up loose ends before closing out your series, you need to ensure that readers aren't left in the dark about things that truly affects Anthem and her future. I will say that perhaps it's a good thing that Anthem learned the startling truth about her parentage, before she slid further into the darkness with her "parents" Harris and Helene Fleet.