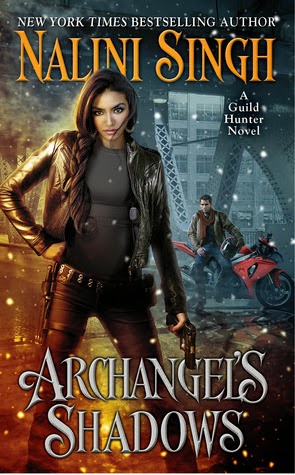 In the wake of a brutal war, the archangel Raphael and his hunter consort, Elena, are dealing with the treacherously shifting tides of archangelic politics and the people of a battered but not broken city. The last thing their city needs is more death, especially a death that bears the eerie signature of an insane enemy archangel who cannot— should not—be walking the streets.This hunt must be undertaken with stealth and without alerting their people. It must be handled by those who can become shadows themselves…Ash is a gifted tracker and a woman cursed with the ability to sense the secrets of anyone she touches. But there’s one man she knows all too well without a single instant of skin contact: Janvier, the dangerously sexy Cajun vampire who has fascinated and infuriated her for years. Now, as they track down a merciless killer, their cat-and-mouse game of flirtation and provocation has turned into a profound one of the heart. And this time, it is Ash’s secret, dark and terrible, that threatens to destroy them both.

When it was announced that Archangel's Shadows (Guild Hunter #7) was to be Hunter Ashwini Taj and Vampire Janvier's story, I was excited. The games the couple has played at each others expense for the past 4 years, and in Angel's Pawn, has been entertaining and fun to read about. Ash is a badass with a major family secret, and Janvier gives as good as he receives. Put them together with Naasir, and you have one hell of team that can take on all comers.

Shadows continues the Archangel's Legion (Guild Hunter #6) storyline. In fact, the opening scene is straight from the war that happens in Legion. It's the most action you will find in this entire story, minus a brief confrontation between Ash and the villain. Shadows gives Elena & Raphael equal presence, gives us an interesting look at Naasir with tempting morsels of what he actually is, while also bringing in Raphael's mother Caliane and Archangel Titus to NY.

To say that I am rather disappointed with Archangel's Shadows, shouldn't shock anyone who followed, or commented on my statuses. So, yes, readers were promised a book with Ash and Janvier and this is what we received. We looked deep inside Ash and found out what has been holding her back. We learn a bit more about Janvier's past and how he was Made. We now know that Ash has the terrifying ability to pick on people's memories which forces her to keep her distance from almost everyone, including Janvier. We also know that Janvier would give himself completely over to Ash in life and in death. What's the problem you ask?

While we did get a better idea of who Ash is and how utterly in love Janvier is with her, we didn't get them fighting back to back except for a brief clip at the beginning of the book. While we did get a tender scene with Ash and Naasir, I would have loved to see more of the opening scene since they apparently were instrumental in helping save NY. My other complaint? Ash was absolutely unwilling to be changed into a vampire. She wanted to live her life to the fullest. So, why the ending I ask?

Shadows is a relationship filled Hodge podge my God reunion story with pretty much every single character who has ever graced the pages of this series showing up at one point or the other. I will say without hesitation, that Naasir is by far the most entertaining character in this entire story, and his relationship with Ash and Elena is just as fun to read about. I want a FULL Naasir story so he can find his MATE. Add in Aodham and Illium, and I'm all set. Get to it, Singh!

Naturally, I am likely in be in the minority with my review, and that is totally fine. I would dare say that Shadows has little romance, little action, little fighting, and more conversational babbling and a mystery than anything else we've seen to this point. We really didn't need more of Elena, and her relationship with Raphael. We know that eventually, Elena won't be the weakest Angel. We know that she will face more terrifying situations. We know that she loves Raphael, and he apparently has a sense of humor now.

Singh has apparently decided that no more humans will take part in her series. That Shadows leaves only Ransom, Deacon, and Sara as the main humans, is rather disappointing. Of course, people will ask me, if I was given the same opportunities as both Honor and Ash under same conditions would I take it. Honest answer is no. We are, of course, talking about fantasy, and living forever is currently impossible. Even if it were, I would say no. That's what free will and free choice is all about.