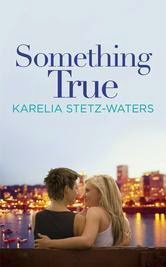 **I received this book for free from Grand Central Publishing, Forever Yours Imprint via NetGalley in exchange for an honest review. Thank you!! This does not affect my opinion of the book or the content of my review.**

Tate Grafton has a tough exterior, but underneath she's kind, caring, and fiercely loyal. That's why she first started working at Out in Portland Coffee-it was her way of repaying the shop's owner for taking her in as a homeless teenager. Nine years later, the coffee shop is floundering and Tate feels like she's letting life pass her by . . . until she shares an unforgettable night with a beautiful stranger. When the mysterious woman disappears the next morning, Tate doesn't even know her name.Laura Enfield was supposed to be in Portland for only a few days-just long enough to oversee a simple business deal before joining her conservative father on his political campaign. But when the closeted Laura romances an employee of the coffee shop her company is shutting down, things get suddenly complicated. Now, the lies she's told for years are beginning to unravel, and her biggest secret is about to be exposed. Laura can't stop thinking about the barista with the soulful eyes, but after a lifetime of deception, can she finally embrace something true?

Something True is a romantic story that features two women, Tatum "Tate" Grafton, and Laura Enfield, who have nothing in common, but are eventually drawn together by desire and love. Tate has been a barista at Out in Portland Coffee for the past 9 years. She's had numerous girlfriends, but hasn't found the one who she can settle down with. Tate is described as being the archetypal female who is loyal to a fault, and who put her own future on hold to help her friend Maggie after she took Tate off the streets. Tate is the kind of person that I strive to be in my lifetime.

Laura Enfield works for a development group that wants to crash Tate's future and her companies existence and replace it with a sandwich shop. Laura comes from a very conservative family with a father who is a Republican Senator from Alabama. While Tate knows exactly who she is, Laura has been afraid to come out of the closet for fear of what it might do to her family. After one night together, Laura emotions are torn to shreds. Her choices and decisions really shouldn't be that surprising to anyone who has shied away from coming out to their families, while also putting their careers in jeopardy.

I will say this about Something True, if you enjoy reading love scenes, well, you get your fill here. I don't normally blush while reading about sex, but holy cow did my neck and face become red. Karelia definitely knows how to trigger emotions with her writing. The story itself is a rollercoaster of emotions as Laura struggles with her identity, and Tate tries to hold herself and her friends together. I wanted to throttle Laura for her seesawing with Tate's emotions, while also wanting to hug Tate until she found her happiness.

If you are a person who perhaps doesn't understand the reason why women love women and not men, perhaps this book isn't for you. Or, perhaps it is if you have an open mind. If you are a political conservative who is against gay marriages, perhaps you should avoid reading this book as well. I mean, nobody wants to force anyone into doing something they are uncomfortable with right? Why not allow the gay community to marry? Why not allow them to experience the depression that comes along with being divorced like heterosexual couples do?

I am sure that many of you are surprised by the fact that I requested and read Something True which is an F/F Romance novel. Perhaps you don't me know me that well after-all. As we are heading for a new year, I really wanted to try something outside of my normal reads. Perhaps 2015 will be the year that my zone expands, and I embrace more authors and novels that aren't normally what I like to read.

As this is my last posted review of 2015, I want to thank everyone for following me, commenting on my reviews, and liking them. I can't put into words how much I appreciate the time you have taken from your busy lives and read my words that I have struggled with for years. 2014 was an awful year for me and my family. I don't want to experience another one like this for a very long time to come. I am hopeful that with a change of scenery, and some hopes for a better fate, 2015 will be smooth as ice on a frozen lake.