*Book Review* Loved It! The Martian by Andy Weir 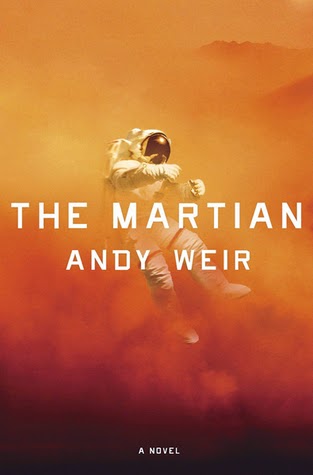 Apollo 13 meets Cast Away in this grippingly detailed, brilliantly ingenious man-vs-nature survival thriller, set on the surface of Mars.

Six days ago, astronaut Mark Watney became one of the first men to walk on the surface of Mars. Now, he's sure he'll be the first man to die there.

It started with the dust storm that holed his suit and nearly killed him, and that forced his crew to leave him behind, sure he was already dead. Now he's stranded millions of miles from the nearest human being, with no way to even signal Earth that he's alive--and even if he could get word out, his food would be gone years before a rescue mission could arrive. Chances are, though, he won't have time to starve to death. The damaged machinery, unforgiving environment, or plain-old "human error" are much more likely to get him first.

But Mark isn't ready to give up yet. Drawing on his ingenuity, his engineering skills--and a relentless, dogged refusal to quit--he steadfastly confronts one seemingly insurmountable obstacle after the next. But will his resourcefulness be enough to overcome the impossible odds against him?

The Martian, by Andy Weir, has been on my radar since it was nominated, and won a Goodreads Readers choice award for Science Fiction in 2014. What intrigued me most about the story, to the point of requesting this book from my library, was the tag line..."An astronaut, left behind, uses his experience and knowledge to continue his existence on an alien planet in the hopes that one day he will be rescued."

I don't normally like when book blurbs make comparison's to other books, or movies, BUT in this case Apollo 13 meets Cast Away definitely works! You haven't watched Apollo 13? Do so! Apollo 13 is one of the greatest real life success stories that NASA has had in its long era of existence. Not unlike The Martian, Apollo 13 tells the story of astronauts who go from the brink of tragedy to glory because of the actions of not only the crew, but brilliant engineers at NASA who found a way to bring them home. I also found myself thinking about the movie Red Planet with Val Kilmer & Carrie-Anne Moss. The endings are eerily similair and I won't go any further in spoiling this book, or the movie.

For the most part, The Martian is told in the first person narrative by Mark Watney, a member of Ares 3's mission to Mars. It is a detailed journey filled with all sorts of technology, math, and science stuff that had a tendency of forcing me to skip ahead a bit. Thanks OK! It also includes humor, suspense, and doesn't leave out the perspectives of the crew who left him behind thinking he's dead, or those on the ground working for NASA struggling to figure out a way to quickly bring Mark home before his supplies run out.

Weir is a wonderful story teller, and he makes Mark a character that you can root for. Mark is the MacGyver of Mars. He rigs up equipment to make water, creates oxygen, and sometimes he needs wind down by listening to ear bleeding disco, or re-reruns from the 1970's. He finds a way to garden potatoes using Mars soil, and in the process, he keeps himself from falling into a deep, dark, depressive state with no hopes of ever going home. To Mark, there are choices, and he doesn't give up when things go brilliantly wrong.

Wow, what a fantastic and incredible story. I loved the humor by the cast of many, including those at NASA who went from the belief that Mark was dead, to the seriousness nature of finding a way to bring him home by any means necessary. I loved Commander Lewis's crew who could have given up and returned home, but willingly put their own lives on the line to bring Mark home. I was not surprised to hear that The Martian will be a featured film (November 25, 2015). It's one movie that I will definitely pay money to see.

In the end, as a person who has followed NASA closely since we first put a man on the moon (Yes, I am talking about the 1960's!!), The Martian is definitely a book that I would recommend to not only science geeks, but to those who also love a well written, well researched, and well put together story. There is a message that I really believe in. We do need to explore space. We DO need to start cooperating with other countries like China, the European Union, Japan, and even Russia to explore the boundaries of this universe. I truly do not believe that EARTH is the only home to humans, and it would be fantastic to find a world similair to our own.