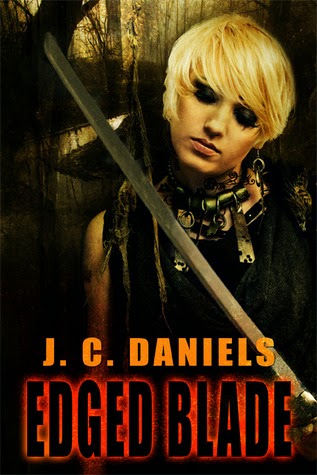 In the year since her life was torn apart, Kit Colbana has slowly rebuilt herself. There’s a promise of hope in the relationship with the alpha of the local shapeshifters and she no longer comes screaming into wakefulness. Life’s not perfect but then again, when was it ever?When her best friend Justin comes to her for help, there’s little question as to what her answer will be. Witches are disappearing and Justin won’t rest until he has answers. Soon, they learn that it’s not just witches who’ve gone missing, but vampires and shifters, too.Unlikely alliances are forged as Kit and Justin found themselves drawn into a twisted web of lies and betrayal. As the clock counts down and the culprit behind recent disappearances is revealed, those Kit loves the most become the target of somebody who will kill to protect an ugly secret

J.C Daniels, in case you haven't had a chance to read this series yet, is the pen name for Shiloh Walker. Daniels series features Aneira warrior, assassin, thief, and investigator Kit Colbana as the main protagonist. Kit lives in East Orlando, Florida where vampires, witches, and shifters all call home. Kit has had her fair share of trouble over the past year, and is just now getting back to where she once was. She still has some issues with PTSD, but anyone who has been kidnapped, tortured, and held prisoner would feel the same way.

Edge Blade finds Kit and her best friend, warrior witch Justin Greaves, investigating the disappearances of (NH) Non Humans (see above). Kit and Jason find themselves up against an unknown entity, betrayal at the highest levels, and their lives may be at risk just by trying to do the right thing by finding and bringing back the NH's. Kit, who has an affinity for weapons, and keeps some dangerous one under a powerful spell, is also a very good tracker, and her skills do come into play.

Readers will notice that there is a definite change in Kit, including her relationship with Damon. While she still loathes vampires with an absolute passion, she finds herself working closely with them, attending a party with them, and perhaps feeling a bit of a kindred bond with vampire Abraham Allerton. I like the way Kit continues to think of ways of making a certain vampire pay with his life for what he did to her. I hope that comes her way soon.

I will say this, if you haven't read this series, please don't expect that Daniels will coddle you with a summary of what happened in the previous 3 novels. Each novel continues the previous books storyline, but adds other elements to the series as well. Although I am a bit miffed by the cliffhanger ending, that just means that there will be a next installment in this series unless we have a zombie apocalypse, or something even more bizarre.

Daniels does introduce some rather interesting new characters who I will not spoil even if you threaten to rip out my finger nails, while leaving out some of Kit's friends that helped save her sanity. I am hoping this means that we will be getting closer to finding out about the Hospital, who is really involved, and whether or not Kit will finally come face to face with her grandmother who treated her like pond scum when she was growing up.

I like that Kit and Damon have found a good place to be with their relationship. While I still have some issues with Damon's possessiveness, and hissy fits, I can appreciate that he does honestly care for her, and doesn't want to see her hurt. He's come a very long way in accepting that there was nothing he could have done to save Kit from her kidnapper.

I still like Justin, and always will, no matter if that puts me in the minority with readers of this series or not. I like that Justin is such a powerful and sardonic character, who yes, has some personal space issues, and loves to push Damon's buttons. His relationship with Kit goes back more years than Kit's and Damon's, and he still refuses to give up.

I'm still hoping to guess what Chang is, and hope that JCD doesn't string us along for much longer. Chang is such an interesting character, and his passion for helping kids appeals to me on another level. I love the dynamics between Kit and Chang, and was impressed with a certain present that he gives to her. I do plan on continuing this series, and hope that we don't have to wait around long to find out what happens next.

**I received this book for free from (Shiloh Walker, Inc.) via (NetGalley) in exchange for an honest review. Thank you!! This does not affect my opinion of the book or the content of my review.**

Posted by Shelley Romano at 9:00 PM