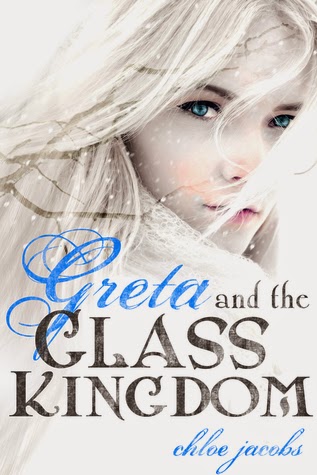 Once upon a dark time…Greta the human bounty hunter never quite fit into the shadowed, icy world of Mylena. Yet she's managed to defeat the demon Agramon and win the love of the darkly intense Goblin King, Isaac. Now Isaac wants her to rule by his side—a human queen. And the very announcement is enough to incite rebellion…To make matters worse, defeating Agramon left Greta tainted with a dark magick. Its unclean power threatens to destroy her and everything she loves. With the Goblin King's life and the very peace of Mylena at stake, Greta must find a cure and fast.Her only hope lies with the strange, elusive faeries in the Glass Kingdom…if she can get there before the evil within her destroys everything.

When Greta was 13, she tried to save her brother from a witch’s fire and ended up falling through a portal to the land of Mylena where humans are the scum of the earth. Everyone believes that humans are to blame for the constant winter conditions. For 4 years, Greta hid her identity and trained to be a bounty hunter, hunting down the Lost for money. Mylena is a world that is filled with not only goblins, but sprites, dwarves, ogres, gnomes, the elusive fairie, and other bizarre creatures.

Then, her cover was blown and she ended up meeting Mylena’s young goblin king Isaac, who invades her dreams and bonds with her like no one else before. But, let's not forget that there were other humans on Mylena as well. I shall call them Wyatt and the Lost boys to save time. As with Greta, these humans were dragged to Mylena against their will, and have been trying to find a way home ever since. They were also used as pawns in a darker scheme by the dark sith lord Agramon.

Greta and the Glass Kingdom (Mylena Chronicles #2) takes us back to Mylena, and this time we find that Greta has survived her battle with the big bad villain, Agramon, but in doing so, his dark magick has caught the Greta train and latched on for the ride and flares up whenever she is stressed or threatened. Except for the dark magick, and the fact that she's not supposed to hunt anymore, things are just fantastic for Greta! ::dripping with sarcasm:: Even though she is with Isaac now, she is truly hated, and there are those aching to kill her for bewitching their King. With Isaac wanting her to be his queen, things quickly spiral out of control, and in return, we get our first real look at the Fairie and the secretive Glass Kingdom.

Shall we speak of the twisted triangle of doom? Shall we make it known that Isaac has Greta's heart, while Wyatt is just spitting into the wind? Shall I say that I don't understand Wyatt's intentions other than he's human, and so is Greta, and he is definitely prejudiced towards non-humans? Perhaps Wyatt would be better served by focusing his energy on a certain goblin hunter instead.

Greta and the Glass Kingdom is a story that travels the gambit from being a paranormal romance novel, to a suspense filled story that hangs on Greta's choices, and others betrayals. Just when you thought it was safe to get back into the water, Jaws aka Agramon returns with a vengeance leaving me shaking my head, and hoping that Great and Isaac can finally find a way to bury this bunghole in a vat of boiling lava.

So, in conclusion, I waited 2 years for the sequel to Greta and the Goblin King only to be left with a twisted, gut wrenching cliffhanger thanks mostly to the actions of others? I think I'm going to scream, and then cry, and then be sick. No really. If you hear screaming coming all the way from Florida, that would be me! Don't send the paddy wagon after me, I'll be fine! I just pray, yes I said pray, that we don't have to wait until 2017 for the SEQUEL!!!! Ya feel me Chloe Jacobs?

**I received this book for free from (Entangled Teen) via (NetGalley) in exchange for an honest review. Thank you!! This does not affect my opinion of the book or the content of my review.**