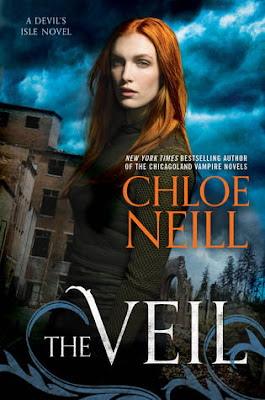 Seven years ago, the Veil that separates humanity from what lies beyond was torn apart, and New Orleans was engulfed in a supernatural war. Now, those with paranormal powers have been confined in a walled community that humans call the District. Those who live there call it Devil's Isle.Claire Connolly is a good girl with a dangerous secret: she’s a Sensitive, a human endowed with magic that seeped through the Veil. Claire knows that revealing her skills would mean being confined to Devil’s Isle. Unfortunately, hiding her power has left her untrained and unfocused.Liam Quinn knows from experience that magic makes monsters of the weak, and he has no time for a Sensitive with no control of her own strength. But when he sees Claire using her powers to save a human under attack—in full view of the French Quarter—Liam decides to bring her to Devil’s Isle and the teacher she needs, even though getting her out of his way isn’t the same as keeping her out of his head.But when the Veil threatens to shatter completely, Claire and Liam must work together to stop it, or else New Orleans will burn.

The Veil is the first installment in the Devil's Isle series by Chicagoland Vampires author Chloe Neil. Seven years ago, The Veil that separates humanity from what lies beyond was torn apart, and New Orleans was engulfed in a supernatural war. Now, those with paranormal powers have been confined in a walled community that humans call the District. Those who live there call it Devil's Isle. Now, it appears that someone wants to revisit the bloody war by opening up the Veil. Can they be stopped, or will yet another war cause indescribable horrors?

24-year old Claire Connolly is a Sensitive, a human endowed with magic that seeped through the Veil. She lives life day to day knowing that if she is ever caught using Magic, she will be sent to Devil's Isle for the rest of her life. Claire has never been trained in the use of her magic. But, when she saves a girl from being eaten by Wraiths, she inadvertently exposes herself to Containment. This brings Liam Quinn to her doorstep, and a strange alliance that will help her understand her abilities before its way too late to turn back. Claire owns & operates the family business, while keeping necessary items on stock necessary for survival. Claire isn't a Mary Sue character. She actually fought and killed in the war in order to save her home. While her overall abilities suddenly blossom almost overnight, there's more to that than meets the eye test.

Liam Quinn is a bounty hunter tracking and capturing Wraiths and bringing them to Devil's Isle. He knows the truth behind what the Wraiths really are, and is on a mission to find the person responsible for killing his sister. Liam lives in the confines of Devil's Isle. After running into Claire, it becomes very clear that the Wraiths are more than they appear. They are intelligent, they hunt in packs, and in once instance, are able to give Liam and Claire a key piece of the puzzle. While there is a lack of romance in this installment, I wouldn't doubt there will be one in the next installment.

Moses - unknown supernatural; loves collecting technology; Liam's friend and one he turns to for information nobody else has access to in the Zone.

Tadji Dupree - Claire's best gal pal; Has no clue about Claire, and hates magic. Mother and Aunt deeply involved in Voodoo which she has avoided. Tadji gets a eye opening awakening in this installment. Should be interesting to see what happens next to her.

Pretty interesting start to the series. I found myself comparing this story to the Sentinels of New Orleans by Suzanne Johnson. Same location. Same idea with the Veil opening up and allowing Paranormals into our world. I would encourage you, dear readers, not to compare Clare with Merit, or Liam with Ethan. It's not even in the ball park. A friend also mentioned Nancy Holzner's Deadtown series if you are looking for yet another series with similair ideas.

I think that after reading Neill's Chicagoland vampires for so many years, this world is a breath of much needed air. I like the differences between the Consulars, and the Court of Dawn. I liked that there were a plethora of different paranormal characters like angels mixed and fighting with Sensitives and Humans. I like that this story takes place in New Orleans. Have been saying this for years, but New Orleans has a rich, dark history that needs to be explored further.