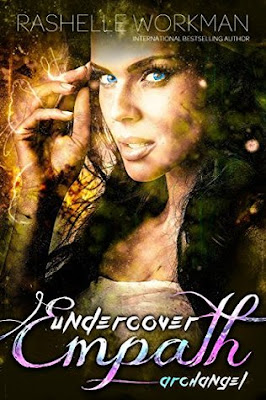 Nineteen-year-old detective Rose Hansen has a secret. She can read a person’s intentions by touching their hands. It’s a curse! A power she never uses if she can help it.

Only one person knows. Her partner Jack.

At least that’s what she believes until a handsome, shirtless stranger appears on her doorstep in small town Blush Valley, California. He leaves her an envelope, but not before articulating his disappointment in her for ignoring her powers. The contents send Rose on a path toward the supernatural, solving her parents’ murders, and possibly even saving the world.

Aside from that, Rose and her partner have two important cases they’re working. The first involves a missing child. The other is the death of a stripper. Ruled a murder, a very hot FBI agent from L.A. shows up and is given lead. To make matters worse, he asks her to go undercover.
Her life is a disaster. Rose can’t strip. She doesn’t even own a dress.

Undercover Empath: Archangel is volume 2 in the Undercover Empath serial. The series features 19-year old Rose Hansen who is the youngest Detective in the Blush Valley, CA police force having graduated from HS at age 14, and Harvard at 18. What makes her stand out even more, is that she has the ability to read another persons intentions by touching them. When last we left Rose in Kindred Demon, she had agreed to go undercover as a stripper in order to catch a serial killer who has left 6 women brutally tortured and murdered.

Rose agreed to work with FBI agent Vincent Mackay, a mystery in every single way, in order to stop the serial killer in his tracks. Rose has gone through extensive training to get her in shape, made friends with Tammi, her trainer, and Kara, another fellow dancer. Without revealing any spoilers, Rose does meet the serial killer face to face, and it stuns her to learn that he is being ridden/possessed by a Kindred Demon. What's even more remarkable is that Workman adds yet another element to the mystery that is Rose Hanson. One that will presumably be explained in the next installment.

As a sidebar, Rose is also working on uncovering what really happened to her mother Sophie Berkeley and father Phillip Hansen while they worked for BITA. She is slowly asking the right questions of Archangel Aaron on why he is so intent on pushing Rose to use what abilities she has for he knows that she will need it when she faces the truth about her parents.

Without going any further, and without revealing any spoilers, this serial must be read in order. Miss one installment, and it will throw the entire novel into disarray. Thankfully, Curiosity Quill has sent me the first 3 volumes, and I will be jumping right into Jorogumo next. You will notice that each serial has a different name; Kindred Demon, Archangel, and Jorogumo. 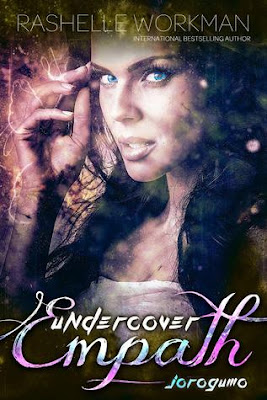 Rose hasn’t been into work in weeks. She needed the time off to recover from her run in with a serial killer that was also a demon.But there’s a new case and this one is even crazier than the one before. Men are dying, their insides turned to mush, and their bodies left in a giant-sized spider web.Rose must figure out who or what is behind the murders before someone she cares about ends up dead..

Undercover Empath: Jorogumo is volume 3 in the Undercover Empath serial. The series features 19-year old Rose Hansen, the youngest Detective in the Blush Valley, CA police force having graduated from HS at age 14, and Harvard at 18. What makes her stand out even more, is that she has the ability to read another persons intentions by touching them, and now, she also has the ability to use fire against an enemy. A shocking revelation that caught everyone by surprise at the end of Archangel.

When we last left Rose in Archangel, she had just taken down a creepy serial killer who left 7 women's bodies around town near strip clubs and attempted to make Rose his eighth victim. After successfully defeating demon ridden killer, Rose ends up taking 3 weeks off from her job to regain her motivation, while also trying to understand her new abilities and also learn more about BITA. Archangel Aaron hasn't exactly been 100 percent forthcoming since appearing with Rose's mothers book. But, his revelation to Rose about why she can use fire, highlights that Rose is definitely something unique and unusual, and there is more to be revealed about what BITA really did to her.

Back on the job, Rose has to deal with the fall out from her actions, and whether or not she will be ostracized for what happened. Concurrently, Rose and her partner Jack Fuller may also have to deal with another serial killer in town. The killer has left (5) men wrapped up in spider silk and their insides have been turned to slush. With more information from her mothers book, she learns that their nemesis maybe be a black widow spider called Jorogumo.

Workman thru ME for a major loop by revealing more Agent Vincent Mackay's background and who he really is. Quite honestly, I don't trust him as far as I can toss him. I just don't trust his goals towards Rose, or the way he is still keeping major secrets from her, or the fact that he has a secret agenda working for BITA. The cliffy ending to this story has left me a bit shocked, and appalled to be honest. The previous two installments didn't leave things up in the air quite this puzzling. Hopefully, the publisher will release volume 4 soon, because otherwise, I am going to have major gastric troubles until they do.