#Monday Review - A Gathering of Shadows by V.E. Schwab (Fantasy) 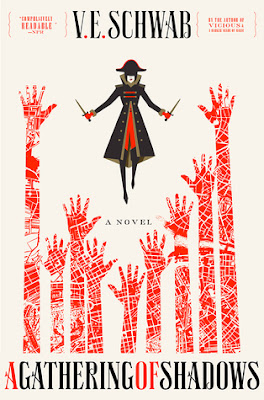 Four months have passed since the shadow stone fell into Kell’s possession. Four months since his path crossed with Delilah Bard. Four months since Rhy was wounded and the Dane twins fell, and the stone was cast with Holland’s dying body through the rift, and into Black London.

In many ways, things have almost returned to normal, though Rhy is more sober, and Kell is now plagued by his guilt. Restless, and having given up smuggling, Kell is visited by dreams of ominous magical events, waking only to think of Lila, who disappeared from the docks like she always meant to do. As Red London finalizes preparations for the Element Games—an extravagant international competition of magic, meant to entertain and keep healthy the ties between neighboring countries—a certain pirate ship draws closer, carrying old friends back into port.

But while Red London is caught up in the pageantry and thrills of the Games, another London is coming back to life, and those who were thought to be forever gone have returned. After all, a shadow that was gone in the night reappears in the morning, and so it seems Black London has risen again—meaning that another London must fall.

A Gathering of Shadows is the second installment in V.E. Schwab's Shadows of Magic series. The series is set in an alternative reality where there are actually four separate worlds: Red (where magic is healthy), White (a place that is starving for magic), Black (a supposed dead world), and Grey (where there is no magic at all). The series features two main characters in Delilah Bard, originally from Grey London, and Kell, one of the last remaining travelers who are able to travel between worlds by using magic.

A Gathering of Shadows picks up FOUR months after the end of A Darker Shade of Magic. When last we saw our heroes, Lila (thief, privateer, magician, & possibly traveler) was walking away from Kell on her way to finding her own way in the Red London world. She helped save a world, and held magic the palm of her hands. Now, she wants to explore everything about this new world and its magic. Lila hitches a ride with Captain Alucard Emery and spends the next four months learning about her new found magical abilities and the language and being the best thief around.

Lila's encounter with Kell and the Dane twins has awakened something in her that will try and test her throughout this story, and leave readers asking a whole lot of questions by the time the last page is turned. The most brilliant part of this novel was Lila's deception after she cons her way into a magical tournament called the Essen Tasch which is held every three years. The tournament consists of participants from the three main kingdoms (Faro, Vesk, & Arnes) in a winner take all contest.

Back in Red London, Kell is coming to terms with the bond that now entangles him and Prince Rhy together and the fact that he is treated more as property than a person. Kell is a different character than the first book. Kell is afraid that if anything happens to him, then Rhy will also suffer. On top of all of this, Lila is still on his mind. The most interesting part of this story is the Games themselves and the fact that Lila and Kell both participate unaware of the others involvement. I kind of felt a whole lot of emotions for Kell. He tries to do the best he can, but in the end, there are only a few people he can truly trust.

There are several other key characters that one should keep an eye out for. There is Captain Emery who has a very interesting past and history, then Prince Rhy who really doesn't like the fact that he is tied to Kell, and manages to put his food down when Kell starts acting meek and afraid. There are other characters in the White London for which you should definitely pay attention. They are keys to what happens in the next installment, and why I was pulling my hair out when the last chapters were finished.

I have to say that I respect Schwab for her world building and her sassy, sarcastic, broken characters like Lila and Kell. Lila really grows this time around, and I can't wait to see what happens in the sequel. This is a story that is told via multiple third person narratives. There is a bit of romance, but it doesn't snap the pacing, or the action that takes place in the story. I am all in for the sequel. I dare say that Kell needs a break and a happy ending when all is said and done.