#Saturday Review - Heir to The Sky by Amanda Sun (YA, Fantasy) 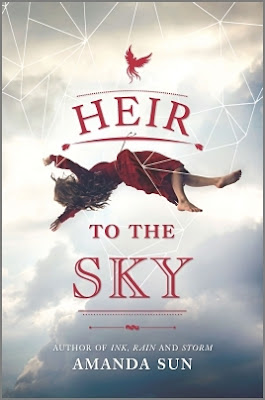 As heir to a kingdom of floating continents, Kali has spent her life bound by limits—by her duties as a member of the royal family; by a forced betrothal to the son of a nobleman; and by the edge of the only world she’s ever known—a small island hovering above a monster-ridden earth, long since uninhabited by humans. She is the Eternal Flame of Hope for what’s left of mankind, the wick and the wax burning in service for her people, and for their revered Phoenix, whose magic keeps them aloft.

When Kali falls off the edge of her kingdom and miraculously survives, she is shocked to discover there are still humans on the earth. Determined to get home, Kali entrusts a rugged monster-hunter named Griffin to guide her across a world overrun by chimera, storm dragons, basilisks, and other terrifying beasts. But the more time she spends on earth, the more dark truths she begins to uncover about her home in the sky, and the more resolute she is to start burning for herself.

Amanda Sun, author of the Paper Gods series, returns with a story about a kingdom in the sky, a fallen princess, and a world where a group of humans live against the backdrop of a prehistoric world with dragons, chimera's, and other strange creatures who are as dangerous as their names imply. 16-year old Kallima, Kali for short, lives in the kingdom of Ashra high about the Earth.

She believes that the ground is overrun with monsters that roam freely. And, even though her minds runs with some interesting possibilities, she doesn't want to be on the ground. In fact, the humans who live on Ashra, and Burumu all believe they are what is left of humankind. Ashra calls Kali the Eternal Flame that ignites the Phoenix. The same Phoenix who it is said to have lifted Ashra and a group of smaller islands into the sky.

Kali finds some interesting secrets that could cause a whole lot of distress if they were to ever get out. This leads to an unfortunate incident. An incident that sees Kali falling off Ashra, through some sort of magical barrier, and onto the ground where she manages to survive. She quickly discovers that her fears about monsters roaming the ground weren't just tall tales to scare the crap out of the children on Ashra.

But, the most telling tale of this story begins on the ground where a handful of humans actually live on the ground. Those like Griffin who is a monster hunter and isn't afraid to take on the most dangerous beasties imaginable to survive. Griffin has managed to survive alongside of Aliyah and Sayra who have both lost everything to the monsters that terrorize humans on earth.

But the tale is much more than Ashra can imagine. It is a fantastical one with mythical beings who shouldn't exist, becoming true allies and friends of a princess who fell to the ground under not her own choice. It will take her own form of courage, strength, and determination to return to the island in the sky and make things right again, while learning how to fight against beasties that are more than happy to take a chomp out of her pampered behind.

Heir to The Sky isn't the first story that I've read about a floating city high above the earth, nor will it apparently be the last. The Internment Chronicles by Lauren DeStefano was also set high above the ground. Heir of the Sky apparently is a standalone novel that perhaps could have used a bit more world building to go along characters like Kali, Griffin, and Elisha. The story is a fairly quick paced novel which made reading and finishing it a breeze.