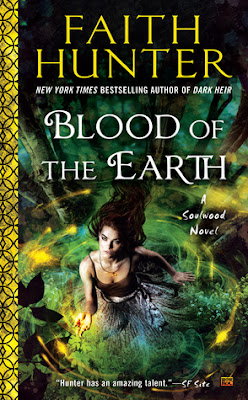 
Set in the same world as the New York Times bestselling Jane Yellowrock novels, an all-new series starring Nell Ingram, who wields powers as old as the earth.

When Nell Ingram met skinwalker Jane Yellowrock, she was almost alone in the world, exiled by both choice and fear from the cult she was raised in, defending herself with the magic she drew from her deep connection to the forest that surrounds her.


Now, Jane has referred Nell to PsyLED, a Homeland Security agency policing paranormals, and agent Rick LaFleur has shown up at Nell’s doorstep. His appearance forces her out of her isolated life into an investigation that leads to the vampire Blood Master of Nashville.

Nell has a team—and a mission. But to find the Master’s kidnapped vassal, Nell and the PsyLED team will be forced to go deep into the heart of the very cult Nell fears, infiltrating the cult and a humans-only terrorist group before time runs out.

Blood of the Earth is the first installment in Faith Hunter's new series called Soulwood. This is a spin-off series that features 23-year old Nell Nicholson Ingram. Readers first met Nell in Jane Yellowrock's short story called Black Water. Nell is totally off the grid and that's exactly the way she likes it. The only identification she has, is a library card which she uses several times a week. When Jane first met her, she smelled like Earth-magic and home which would explain why everything Nell touches, seems to grow faster than other means.

Nell is a character who is hyper-alert because of her continued run ins with the Church and certain players who want to drag her back to the church where they can have their way with her and take her 150 acres of land. Nell has a rather long conflict with the church that grows more antagonistic as the days go by. Thanks to her brief marriage to John Ingram, Nell own's a piece of property that shares a border with the church, which makes it easy for the Church to trespass on her property, and do damage to her crops, animals, and home. It didn't help that Nell helped Jane find a way on the Church's property to rescue children and a kidnapped vampire.

It also makes for a ideal base of operations for newly promoted Special Agent Rick LaFleur and his new PsyLed team which includes Paka (African Black Were-leopard), Occam (wereleopard), Tandy (Empath), T. Laine (Witch), and JoJo (human computer genesis). Rick, after consulting with Jane, believes that Nell would be a fine addition to this new team that consists of both humans and paranormals. Remember folks, even though Rick is the so called boss, this story is Nell's to tell. She also gets some righteous payback for readers who have had a hard time liking RickyBo in the past.

Nell is the narrator. She is the main focus. She is sassy, honest, hard-working, and doesn't like to be messed with by anyone. It is her life and history that we finally get a deeper understanding into. Hunter takes a step by step building block and puts together what makes Nell so intriguing that has already left me wanting to read the sequel. I loved the little surprise when we finally get to know what Nell is. Guess Jane was correct in Black Water. We also get a better look inside Nell's former church thanks to the fact that her family still lives on the land, and there are several missing girls who make have found their way on the churches land.

I actually don't care for polygamy all that much, but I found Nell's family to be impressive nonetheless. I especially loved finding out a large secret that really lifted a whole lot of past anger off Nell's shoulders. I absolutely loved her little sister Mud. What intrigues me is the possible relationship between Nell and Occam. He is just adorable folks, and I love the way he treats Nell throughout the story. This is story that is filled with action, mystery, suspense, humor, and a whole lot of fun. Don't go into this assuming that you will get a whole lot of Jane and her crew. You won't. Yet, at the same time, Hunter did give a bit part to ONE character who is important to Jane.

Excellent start to the series! I hope it is as successful as Hunter's Jane Yellowrock series. Love that Hunter has created yet another brilliant female heroine to follow and cheer for!

I checked out and drove sedately to the hotel. It was called the Hampton Inn and Suites, Knoxville North. And it was amazing. There was shiny stone on the floor and carpet all over—and not handmade rag rugs, but big carpets made on commercial looms. It wound through the lobby and down the halls, perfectly woven. When I finished goggling, I asked for directions to the room and gave my name. I was given a little plastic card, like a credit card. I had no idea what to do with it, but I accepted it and the directions that came with it. I had ridden in elevators before, at the hospital where Priss went when she had trouble birthing her baby. I went to see her baby boy, looking through the windows into the nursery. After hours. When no one from the church might catch me there. So I knew how to get to the fourth floor, and followed directions to the suite at the end, where I knocked to be let in.
Tandy opened the door, his reddish eyes perplexed, until he looked down, to see the plastic card in my hand. Smiling, he left room, closing the door behind him. “The room key works like this,” he said softly, taking the card in his red-lined hand and demonstrating the way it fit into the slot and the little green light that said go.
“Oh,” I said, embarrassed. They must think I was a little country bumpkin. Which I was, I realized. Face burning, I said, “My thanks for demonstrating the proper methodology.”
He pulled the door back closed.” “‘How then shall they call on him in whom they have not believed?’” he quoted.” “‘And how shall they believe in him of whom they have not heard? And how shall they hear without a preacher?’ Or a teacher.”
“You quoting Acts to me, Tandy?” I said with a small smile, feeling better, which had to be what the empath had intended. “You don’t look much like any preacher I ever saw.”
“The church where you grew up would burn me at the stake should I presume to preach to them,” he said, showing a disturbing knowledge of God’s Cloud’s politics and reaction to outsiders. Especially outsiders who looked so different.

Faith Hunter, fantasy writer, was born in Louisiana and raised all over the south. She writes three Urban Fantasy series: the Skinwalker series, featuring Jane Yellowrock, a Cherokee skinwalker who hunts rogue vampires. The Soulwood series, featuring earth magic user Nell Ingram. And the Rogue Mage novels, a dark, urban, post-apocalyptic, fantasy series featuring Thorn St. Croix, a stone mage. (There is a role playing game based on the series, ROGUE MAGE.)
Under the pen name Gwen Hunter, she writes action-adventure, mysteries, and thrillers. As Faith and Gwen, she has 30+ books in print in 29 countries.
Hunter writes full-time, tries to keep house, and is a workaholic with a passion for travel, jewelry making, white-water kayaking, and writing. She and her husband love to RV, traveling with their rescued Pomeranians to whitewater rivers all over the Southeast.
Find Faith online at her website FaithHunter.net, her blog, on Twitter, Facebook, and Goodreads.

There’s also a tour-wide giveaway you can share! Faith is giving away a $25 Amazon or Barnes & Noble gift card (winner’s choice), and 5 custom key chains. Open to US residents only.