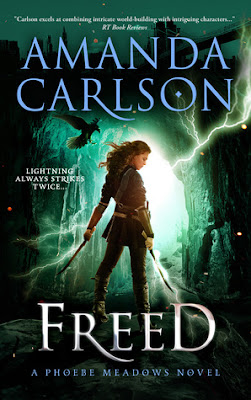 Phoebe Meadows has one thing on her mind: Free her mother.

For the last month, Phoebe has been training in the Valkyrie stronghold readying for battle. But when she stumbles into a secluded valley after a day of grueling practice, she’s given a dire prediction. Phoebe must leave the stronghold immediately with the aid of the giant, Junnal, to rescue her mother from the dark elves. If Phoebe fails, Leela will be transported to a place that can no longer be reached.

Leaving Fen behind threatens to undo her, but Phoebe stays true to the mission. Along the way, she allies with the god Baldur and an old white elf mage. Together, they storm the realm, and with the help of an angry wolf and her Valkyrie sisters, they just might stand a chance to free the valiant shieldmaiden.

But Phoebe soon learns that in order to save her mother, she might lose something too precious to sacrifice…

Freed is the second installment in author Amanda Carlson's Phoebe Meadow's series. As the story picks up, Phoebe has been in the Valkyrie compound training hard to become one of the legendary & immortal Valkyrie's. Phoebe is the daughter of Odin, and Leela, one of the legendary Valkyrie's. Alongside are her lover Fenrir, her half-brother Tyr, the God of war, plus her best friend Sam, and her aunt Ingrid. While Phoebe is training with the rest of the Valkyrie's and being pushed to the limits in order to get caught up on lost time, she's visited by Odin's trusty raven Huggie.

Odin, via Huggie, believes that Phoebe is ready to go on a mission of her own. He tells Phoebe, who finally has a weapon called Gundren, that she must travel to Svartalfheim, where her mother is being held by the Dark Elf Invaldi, and rescue her. The catch? She must do so without Fen, or Tyr or the Valkyrie's alongside. Her only support is to be the Jotun-Troll Junnal who has already saved her life more than once and a magical cloak. But, while Phoebe is looking for a way to get her mother home where she belongs, the Norns are hot on her tail. They have plans to make her, Odin, and Leela pay for their supposed transgression in allowing Phoebe to be kept a secret for 24 years.

Freed is a wonderfully entertaining and action packed sequel to Struck. Carlson takes readers into the dark realm of Svartalfheim where Phoebe finds some interesting new allies including another half brother in Baldur, son of Odin and Frigg, and Callan a white elf wizard who was left behind by his own people. Phoebe isn't alone for long. Not when she is reunited with her mother. Not when Ingrid and her sisters arrive to take on the Dark Elves and help Phoebe complete her mission. Not when the Norns show up and throw a monkey wrench in Phoebe's future plans.

Freed left me with some anxious feelings, but only because Carlson has a tendency of leaving heroines in the lurk at the end of each story. This is the same of Phoebe and Freed. Phoebe has definitely come a very long way from the girl who worked at Macy's before being struck and revealed as a Valkyrie. She has accepted her fate. She even steps up and faces bullies who are either jealous of who she is, or are afraid of being over looked once important missions are chosen. I adore Sam.

I don't believe she is the comic relief of the story, but she comes close to being very entertaining and Phoebe's rock when things aren't necessarily all creme sickles and chocolate. I loved Baldur. I can definitely see where he was coming from in knowing what his fate would be and damn anyone who thought to allow him to do what he wanted with his own life. I am eager to read Exile, the third book in this series. As Phoebe has already traveled to several interesting worlds since Struck, things are definitively about to get even more dangerous.