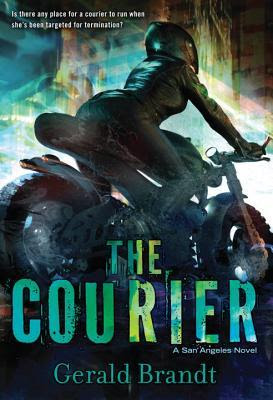 
Kris Ballard is a motorcycle courier.  A nobody.  Level 2 trash in a multi-level city that stretches from San Francisco to the Mexican border—a land where corporations make all the rules.  A runaway since the age of fourteen, Kris struggled to set up her life, barely scraping by, working hard to make it without anyone's help.

But a late day delivery changes everything when she walks in on the murder of one of her clients. Now she's stuck with a mysterious package that everyone wants. It looks like the corporations want Kris gone, and are willing to go to almost any length to make it happen.

Hunted, scared, and alone, she retreats to the only place she knows she can hide: the Level 1 streets.  Fleeing from people that seem to know her every move, she is rescued by Miller—a member of an underground resistance group—only to be pulled deeper into a world she doesn't understand.

Together Kris and Miller barely manage to stay one step ahead of the corporate killers, but it's only a matter of time until Miller's resources and their luck run out..

The Courier is the first installment in author Gerald Brand'ts near future Science Fiction trilogy called San Angeles. Brandt's protagonist is Kris Ballard, a motorcycle courier in a world where corporations run everything, but use couriers for things they don't want to send over the Net. San Angeles is actually an area that stretches from San Diego to San Francisco. There are (7) levels to the megalopolis. The higher you go, the more likely you will be able to see actual sun, and not filtered light. Kris lives in the lower levels.

Kris finds herself in a precarious situation after picking up a late delivery from her boss. Dispatch claims the pick-up and delivery will be quick and easy, and will make Kris some money she needs to keep her motorcycle running and food on her plate. But, after walking in on a scene straight out of a horror film, Kris finds herself on the run being chased by Quincy, a man who has no morals and no compunction about using brutal means to get what he wants. By a stroke of luck, Kris runs into an underground anti-corporation resistance group that sends Ian Miller to recruit her, and to get her out of the mess she's in. But, trouble is one-step behind her at all times.

Let's chat about Kris for a moment. Kris has a background that one would describe as continued abuse until she decides enough is enough. Loss of parents. Taken in by relatives, abused, and ignored. Kris experiences a plethora of bad situations where she is force to run and hide, and run some more until she finds that her luck may be coming to an end. She faces her mortality more times than not, but luckily, she understands the streets better than those chasing her. Kris isn't the only key character that Brandt focuses on, but the only one that truly matters. The other two characters are simply power hungry and don't give a hoot who they destroy in order to get what they want. Including Kris.

I'm going to say something that will make you mad, probably. Authors. Do. Not. Need to write rape scenes into book. Rape scenes are NOT entertainment. Abuse scenes are NOT entertainment. Authors can skim over the ugliness of rape and abuse by just saying that the character survived a part of her life that she doesn't want to dwell on or look back on. That being said. I loved the world building. I loved how Kris finds the strength to keep moving forward even though things look bleak. I love that this isn't just a story that takes place in San Angeles, but on a space station as well. I am positive that I will be reading the sequels called The Operative, (which the publisher kindly sent to me) as well as the final book in the trilogy.